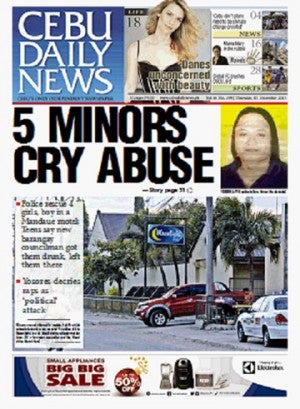 Police are looking for a newly elected Mandaue city councilman after four teenage girls and a boy were rescued from a motel, where he had taken them on Tuesday night.

The minors, aged 15, were found drowsy and intoxicated in a two-floor room of the Moonlight Inn at the Reclamation Area.

The youths said they were taken there in a car by 27-year-old Cambaro councilor Jay-r Yosores, who invited them for dinner. The high school students said they earlier asked his help to finance dance costumes for their school program.

Yosores, who just took his oath last Friday as a first-term barangay councilor, was not around when police arrived past 10 p.m.

He and a male companion named “Gio” had left the motel earlier to purchase some items, according to a room boy who recognized the councilor as a regular patron.

Before they left, the motel customers left P1,200 with the young male student.

When Cebu Daily News contacted him by phone, Yosores, who is a local pageant organizer, denied any involvement in the motel visit.

He said the allegation was “politically motivated” and that he would go to the Mandaue police station this morning with his lawyer to clear his name.

According to 15-year-old Jenny (not her real name), she and her girl friends locked themselves in the bathroom and started shouting for help. One of them texted her parents on her cellphone.

Jenny said the councilor hugged her when she was already drunk, and sent her upstairs to the bedroom. At that point, she and her friends realized they were in danger and locked themselves in the bathroom.

Senior Supt. Petronelli Baldebrin said the Mandaue police would file charges of Consented Abduction in Relation to Republic Act 7610 , the law on Special Protection of Children against child abuse, exploitation and discrimination.

Baldebrin said police will coordinate with the motel, which is prohibited from letting minors enter the premises.

Police responded to a distress call from the parents of one of the students.

The five minors were brought last night for medical examination to the “Pink Room” of the Vicente Sotto Memorial Medical Center where trained specialists receive cases of violence against women and children.

One of the rescued youths, 15-year-old Jenny told CDN she and her friends approached Yosores to solicit funds for costumes for a dance presentation in their public high school where they are third year students.

She said Yosores then invited them for dinner, saying they would hang out in a tent.

The five students met in Parkmall in Mandaue where they were fetched in a red car driven by Yosores with a male companion “Gio” in the front passenger seat.

She said the car had temporary plate number with the name “GATEWAY.”

The car passed by a drive-through shop where Yosores got down and returned with a pitcher of what turned out to be an alcoholic drink.

When the car stopped, Jenny said that she and her friends were surprised to be brought to a room with bamboo chairs and tables.

In the motel room, they were plied with drinks before any food was ordered.

“Iyaha man ming gipugos gud ug painom bisan wala pa mi kaon,” said Jenny, who said the students went along at first because they trusted Yosores as he was a barangay official.

(He forced us to drink even though we hadn’t eaten anything yet.)

At one point, Yosores reportedly asked the girls if they had sexual experience.

By the time food was ordered through room service, the students were drunk.

Jenny said she was dizzy and nauseous, when the councilor hugged her, asking if she was all right: “Okay ra ka? Okay ra ka?” before telling her to go upstairs, where there was a bed and comfort room.

Scared to go alone, Jenny asked one friend to accompany her.

Once inside the comfort room, the two other girls followed. They compared notes and decided to call for help.

(We were scared so we stayed inside and started shouting for help.)

One girl texted her parents to rescue them. Their boy companion lay on the bed tipsy.

Operatives of the Investigation and Detection Management Branch (IDMB) in Mandaue City Police Office responded to the call of worried parents at 10:15 p.m.

PO3 Gilbert dela Cruz, investigator, said they found the room in a mess, with the minors throwing up on the stairs and the floor.

Yosores, in a separate interview, said he was in Cebu City on Tuesday night busy preparing a proposal for an event for some south Cebu towns.

When he got home, his pregnant wife told him that police had come by looking for him.

“I didn’t go home early because I was busy preparing a pageant proposal,” he told CDN.

He said he owns a red Toyota but not one with a temporary plate number or from Gateway.

He said he values his good name and would not do anything to harm people.

She encouraged Yosores, who won the second highest number of votes in the barangay Cambaro election, to surrender to authorities and tell his side.

She said Yosores doesn’t drink liquor and was a generous man.

“This charge could be politically motivated,” she said.