Task force to work hand in hand with Ping Lacson 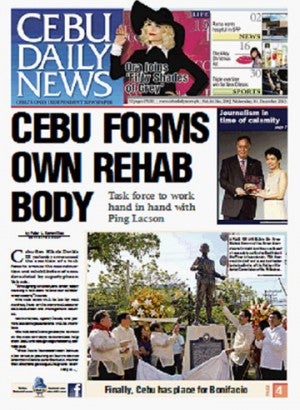 Cebu Gov. Hilario Davide III yesterday announced the creation of a task force to oversee the reconstruction and rehabilitation of areas devastated by supertyphoon Yolanda.

The task force will be led by Neil Sanchez, head of the Provincial Disaster Risk Reduction and Management Council.

The task force’s first priority is to meet in the next few days to centralize help from local and foreign organizations, Davide said.

“There has to be coordination because a lot of aid is pouring in but we do not know yet where to send them in a manner that everyone gets equal help and attention for the rehabilitation,” he said.

The Capitol initiative is expected to link up with Lacson through the help of Sen. Teofisto “TG” Guingona, said Davide.

“We will definitely ask help from the national government for funding,” Davide said.

President Aquino said he was optimistic the work would be realized “sooner” than initially expected with his appointment of Lacson.

“Having Ping Lacson at the center wherein he’s a no-nonsense guy, focused solely on Yolanda rehabilitation, will undoubtedly achieve the targets sooner,” he said during the Bulong Pulungan forum in Pasay City.

“And that is, I guess, why we look at the unique capabilities of Mr. Lacson or Senator Lacson to be able to deliver.”

Davide said the Capitol will focus on the recovery of agriculture and livestock, and not just infrastructure and rebuilding houses destroyed by supertyphoon Yolanda.

Cebu lost an estimated P800 million in crops and about P1.5 billion in the livestock and poultry industry.

“We will divide the task force into different clusters such as shelter, agriculture and food security. Our agricultural group has already launched its own rehab plan last week in Bantayan island and we plan to branch it out to Camotes next week,” he said.

Banofos, former commander of the Army’s Special Operations Command, took over from Lt. Gen. Roy Deveraturda who was reassigned to head the military’s Western Command (Wescom).

The turnover of command was supposed to be held on the day supertyphoon Yolanda pummelled the Visayas and Coron in Palawan in Nov. 8.