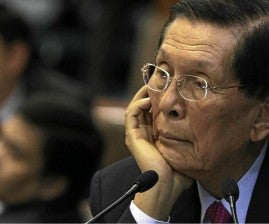 MANILA, Philippines—As Senator Miriam Defensor-Santiago was heaving fire on her privilege speech Wednesday, Sen. Juan Ponce Enrile preferred to play it cool by  whipping out his tablet to engage himself in a computer game.

Enrile played what appeared to be a game of Bejeweled on his tablet computer as Santiago directs her speech on the  Senate Minority Leader.