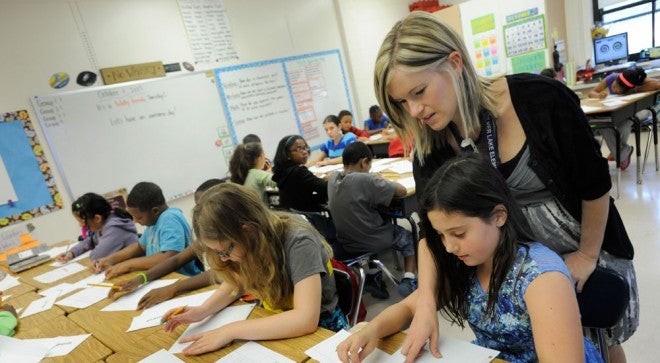 PARIS—Asian nations cemented their top positions in an eagerly awaited report on global education Tuesday, as their students continued to outshine Western counterparts in math, science and reading.

Shanghai again ranked first in math, science and reading in the three-yearly report by the Paris-based Organisation for Economic Cooperation and Development (OECD), based on surveys of more than half a million 15-year-olds in 65 countries.

The so-called PISA report (Program for International Student Assessment) is the single largest study of global schooling and has been dubbed the World Cup of education.

It is highly influential among education officials, with participating countries representing more than 80 percent of the global economy and often adapting policy in response to the findings.

Shanghai’s top rankings means its students are the equivalent of three years of schooling ahead of their counterparts with average scores, including those of many wealthy Western countries such as Britain and France.

This year’s survey focused on math skills, with Macau, Japan, Liechtenstein, Switzerland and the Netherlands rounding out the top 10.

Lacking a truly national sample in China, the report only includes some of the country’s most economically advanced regions, which the OECD acknowledges are not representative of the entire country.

OECD experts said the top scores of Asian nations were down to a strong culture of education and to teacher training.

Their education systems “ask a lot of their students. There is a culture of education: parents, children, teachers—everyone is working in the same direction,” said the OECD’s Eric Charbonnier.

Also, “every country that is at the top, which has moved forward, has put teacher training at the heart” of its education system, he said.

The report highlighted Italy, Poland and Portugal for showing improvements in math skills since the last survey, but noted drops in Sweden and Finland.

Students in Britain scored the exact average of OECD nations in math, with their counterparts in France only slightly ahead. The United States was further down, wedged between Slovakia and Lithuania.

Peru ranked at the bottom of the list in all three categories, with its students the equivalent of six years of schooling behind students in Shanghai.

Only one European country, Finland, made it into the top five in any category, scoring as the fifth-top performer in science.

The report noted that gender differences remain strong, with girls continuing to outperform in reading skills and boys showing better results in math.

Australia, Canada, Estonia and Finland were noted for having high levels of “equity in education,” where students can succeed regardless of their socio-economic background.

But France, which has one of the strongest education brands in the world with its global network of lycees, performs very poorly in that respect.

Students in high-scoring Korea were also the least content, however, with only about 60 percent of them reporting being happy at school.

The happiest students were in Indonesia, Albania and Peru, all countries that were well below average in the rankings.

Describing the report as the “world’s premier yardstick” for education, OECD Secretary General Angel Gurria said it highlighted the need for “investing in structural reforms to boost productivity” even “when public budgets are tight.”

“The highest-performing school systems are those that allocate educational resources more equitably among advantaged and disadvantaged schools and that grant more autonomy over curricula and assessments to individual schools,” he said in the foreword to the report.

The first PISA survey was carried out in 2000, with 30 nations taking part. Shanghai joined in 2009.

Gurria said the report was aimed at helping governments and educators in “identifying the characteristics of high-performing education systems… that they can then adapt to their local contexts.”—Nadia Teskrat, Andrea Graells Tempel