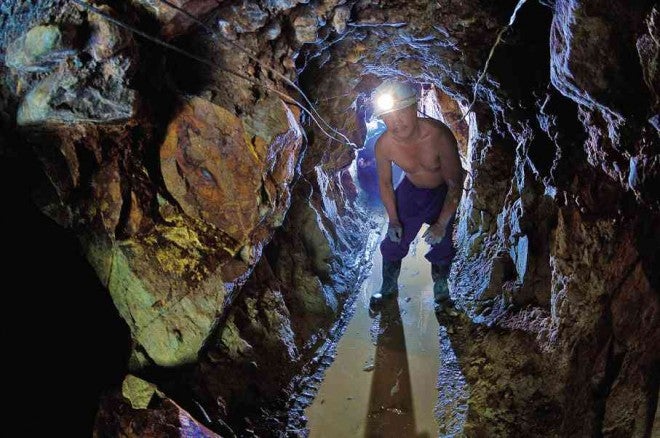 THE MINING industry in the Cordillera relies heavily on a workforce that largely ignores women. RICHARD BALONGLONG

Mining is one of the last bastions of masculinity. In Benguet province, for example, women are not allowed in “usok” (small mining tunnels). Miners are also not allowed to have sex three days before and after entering a new mine.

Lepanto Consolidated Mining Co. in Mankayan town allowed women inside its mines only 20 years after it started operations. And yet women are in the forefront in softening mining’s hard image.

“We consider ourselves a platform for discussion,” says Patricia Bunye, president of

Diwata–Women in Resource Development Inc. (Diwata-WRD). “We’re a nonthreatening group. We want issues to be discussed in an intelligent manner.”

Diwata was founded by former Foreign Secretary Delia Albert who, when she was heading the Mining Development Council, realized that it was the women in the Cabinet who were active in promoting mining in the country.

“They felt strongly that they could share with the larger community and through dialogue their scientific knowledge, practical experience and even wisdom on issues they know pretty well. They believe that through constant learned exchange of ideas, they can contribute in bringing an

understanding and hopefully an appreciation of efforts to make our resources serve our people,” Albert says.

Albert named the group after the “diwata” (nature spirit) to bring blessings to those who do beneficial things. She picked the common fern for a logo design after noticing ferns in most mining areas she had visited.

It launched forums during a yearlong period, particularly on the “Executive Order No. 79: The Indigenous Peoples and Women’s Views,” “Dialogue on Mining as a Means for Development” and “Bulong-Pulongan: Diwata Meets the Mining CEOs.”

It also held a “Geology 101” forum for students where top geologists, like Eliza Laudencia, Redempta Baluda, Rodelee Ofiaza and Maria Ines Rosana Balangue-Tarriela, talked about the different fields of geology and how women geologists toughened up with their male colleagues.

Diwata wants to hold a road show of its Geology 101 for Cordillera and Mindanao students so they would understand geology and mining, Bunye says.

After a dialogue with the indigenous women leaders, Diwata echoed its call for the government to include their assertion that their right to self-determination should be respected in the implementing rules and regulations of EO 79.

“We always try to agree and find the common grounds to those who oppose mining…. At the heart of it all, we want the country to develop,” says Bunye.

During the recent National Mine Safety and Environment Conference in Baguio City,

Diwata held a dialogue on the book, “Mining’s Dirty Dozen: The Legacy of the First Mining Engineering Graduates of the Philippines.”

The authors, Zorayda Amelia Capistrano-Alonzo and Mercedes Balota-Suleik, talked about their fathers who belonged to the Dirty Dozen. Joining them was Edda Villaluna Henson of the Villaluna family, said to be the “royal family of Philippine mining.”

The three women talked about their lives with mining leaders and how they carved their own careers in the industry.

Read Next
High costs keeping home repairs at bay in Leyte
EDITORS' PICK
Over 3 Million worth of prizes to be won at Smart Padala’s SENDali Manalo Promo!
Gear up and get ready to play with Yamaha Mio Gear
Acer starts the year off strong with the Aspire Vero National Geographic Edition
If elected VP, Sara Duterte will push for mandatory military service for all Filipinos
Senate bill seeks to penalize employers requiring employees to work during rest hours
Marcos-era elections: Not what his son signed up for
MOST READ
Jose Manalo’s son Benj pays tribute to late mother: ‘You’re a testimony of God’s love’
Vice mayor slams Vico Sotto for turning Pasig into a ‘puro palabas’ city
‘Sampal sa gobyerno:’ Drilon wants unvaxxed PAO chief barred from working
Bongbong-Sara tandem names 7 candidates in initial senatorial slate
Don't miss out on the latest news and information.