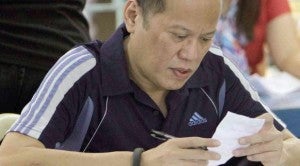 MANILA, Philippines—He may be too old to believe in Santa Claus, but President Benigno Aquino III still has wishes come Christmas.

The country’s top executive said that he wishes for an end to disasters, natural or manmade, that devastated the country for the past three months.

“I wish that the book of problems of this country for this year finally closes,” Aquino said during the 27th Bulong-Pulungan Christmas party in Pasay City.

The Zamboanga City siege in September, the 7.2-magnitude earthquake that shook Central Visayas in October and Supertyphoon “Yolanda” that devastated Eastern Visayas and Southern Luzon last month which left more than 5,000 people dead were the three major disasters that broke Aquino’s heart.

Aquino, however, remained optimistic for the forthcoming year.

“At the start of the New Year, one says there are so many opportunities that are coming, and I really hope that our people maintain the optimism in the current (year) and the ‘can do’ attitude that is already being nurtured at this point in time,” he said.

“So the wish really centers on, hopefully, that there be no more challenges of this magnitude this year.”

Aquino wants to see a refurbished NAIA-1 before stepping down