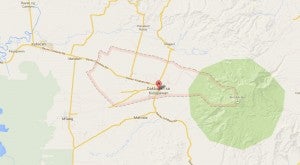 Sispon had been receiving threats since October.

Colonia said Sispon, who was sitting at the rear portion of the passenger jeep, was first shot by one of the two suspects riding tandem on motorbike.

Quoting witnesses, police said Sispon was not hit. But the gunman pointed his gun at the driver who was forced to pull over along the highway.

Sispon, he said, tried to run but the gunman chased and finished him off.

“They appear to be professional guns for hire, they did not even cover their faces,” Colonia said, adding that the suspect fled on the same motorcycle after the shooting.

“He has been receiving death threats through his mobile phone,” Colonia quoted the victim’s wife as telling probers.

Police investigators were in custody of the victim’s mobile phone that contained threat messages.

Police said the killing could be work-related since Sispon had told his wife about the threats he had been receiving while in the election office in Parang, Maguindanao.

The threats came after the recent barangay (village) elections.