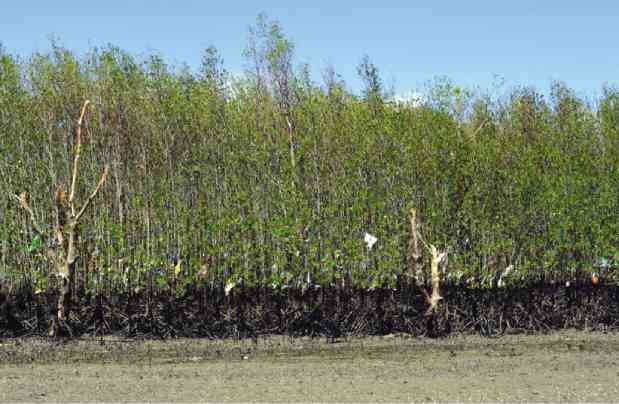 THE OIL spill from a power barge in Estancia town, Iloilo province, has contaminated mangroves in the neighboring town of Batad.PHOTO COURTESY OF DR. REX SADABA

ILOILO CITY—The oil spill that forced the evacuation of thousands of residents in typhoon-hit Estancia town in northern Iloilo province has also breached into mangrove areas in an adjoining town, according to a mangrove specialist.

At least 4 hectares of old-growth and reforested mangrove areas in Batad town are now “heavily oiled” by bunker fuel, according to Rex Sadaba, coordinator of the University of the Philipines Visayas’ oil spill program.

Sadaba, who conducted studies on the impact on mangroves of the Guimaras oil spill in 2006, said the most affected were the 10-year-old mangrove trees belonging to the Rhizophora stylosa species.

Oil contamination adds stress to the trees because most were already defoliated by strong winds brought by Supertyphoon “Yolanda,” he said.

At least 200,000 liters of bunker fuel leaked into the shores of Estancia after the 35-megawatt National Power Barge 103 slammed into the rocky coast of the town at the height of the typhoon. Monstrous winds and waves dislodged the barge from its mooring about 200 meters from the coastline of Barangay Botongon in Estancia.

Bunker fuel can severely affect mangroves because it coats the trees and blocks their breathing pores, according to scientists.

Sadaba’s studies in Guimaras have shown that some mangroves contaminated by bunker fuel exhibited albinism, decrease of the size of leaves and stunted growth.

He said the contaminated mangroves should be left untouched because cleaning them up could do more harm.

Officials had earlier ordered the mandatory evacuation of residents near the oil spill site after the Department of Health (DOH) reported high levels of the toxic substance benzene in the air.

As of Sunday, Northern Iloilo Polytechnic State College-West Campus in Estancia is sheltering 647 families, according to provincial administrator Raul Banias.

The DOH has issued warnings on the issue of proper equipment of workers involved in the manual cleanup after it was reported that several residents hired for the cleanup had been wearing only regular masks or shirts to cover their faces.

Dr. Glen Alonsabe, regional epidemiologist, said the workers should be required to use the prescribed personal protective equipment, which include gloves, coveralls, chemical masks with filters, and googles.

Alonsabe said no cleanup work should be allowed from 10 a.m. to 3 p.m. when the temperature and toxicity level are at their highest.