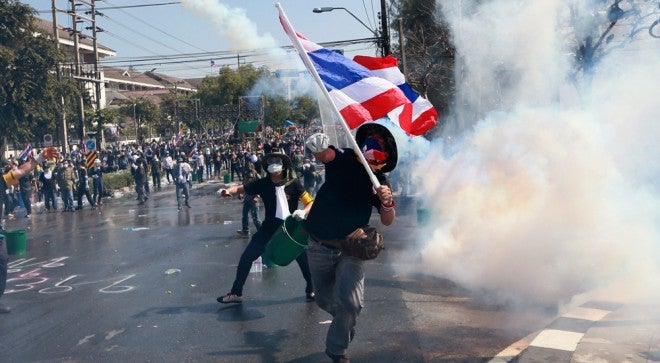 BANGKOK – The United Nations closed its main office in Bangkok, dozens of schools closed and many civil servants stayed away from work Monday as the Thai capital braced for more violence in a spiraling political crisis.

After a weekend of chaos in pockets of Bangkok, protesters vowed to push ahead with plans to topple Prime Minister Yingluck Shinawatra by occupying her office compound along with other key government buildings. Police again used tear gas on thousands of protesters on Monday after repeatedly driving them back with similar attacks throughout Sunday.

In an e-mailed statement to its staff, the United Nations’ security department said “there could be violence (Monday) on a large scale … staff should avoid government offices” and other protest locations.

Many of the offices and schools closed Monday were located near the Government House, in the historic quarter of the capital, where police over the weekend fought off mobs of rock-throwing protesters armed with petrol bombs. At least three people were killed and 103 injured in skirmishes over the weekend.

The protests have renewed fears of prolonged instability in one of Southeast Asia’s biggest economies and comes just ahead of the peak holiday tourist season. Protest leaders want to replace Yingluck’s popularly elected government, which they say is illegitimate, with an unelected “people’s council,” but they have been vague about what that means.

Protest leader Suthep Thaugsuban, a former deputy prime minister, has refused to say how such a demand, which has been criticized as undemocratic, could be accepted by a government that was elected with an overwhelming majority.

However, his sustained campaign has led to suggestions that he may have the backing of the military, which has long had a powerful influence over Thai politics. The army has often stepped in during times of crisis, carrying out 18 successful or attempted coups since the 1930s.

Suthep met with Yingluck late Sunday in the presence of top military officials even though he has an arrest warrant against him. He later told cheering supporters that he told Yingluck that the only way to end the protests was for her to step down. He said his goal is to topple Yingluck by Wednesday.

The military has said it is neutral in the conflict but army commander Gen. Prayuth Chan-ocha has urged the police not to use force.

“There was no negotiation during this meeting,” Suthep said. If Yingluck “listens to the people’s voices and returns the power to the people obediently, we will treat Ms. Yingluck Shinawatra with politeness because we all are good citizens.”

The French Embassy issued one of the strongest warnings of dozens of foreign governments, urging citizens to “stay inside” to avoid the conflict on Bangkok’s streets. The French School is located in a northeastern Bangkok neighborhood where gunshots rang out over the weekend during clashes between Yingluck’s supporters and opponents.

It was one of at least 60 schools closed in Bangkok on Monday.

Political instability has plagued Thailand since the military ousted Yingluck’s brother, Thaksin Shinawatra, in a 2006 coup. Two years later, anti-Thaksin protesters occupied Bangkok’s two airports for a week after taking over the prime minister’s office for three months, and in 2010 pro-Thaksin protesters occupied downtown Bangkok for weeks in a standoff that ended with parts of the city in flames and more than 90 dead.

Suthep and his supporters say Yingluck is a puppet of her brother.

Any further deterioration is likely to scare away investors as well as tourists who come to Thailand by the millions and contribute 10 percent to the $602 billion economy, Southeast Asia’s second largest after Indonesia. It is also likely to undermine Thailand’s democracy, which had built up in fits and starts interrupted by coups.

Most of the protesters are middle-class Bangkok residents who have been part of the anti-Thaksin movement for several years and people brought in from the opposition Democrat Party strongholds in the southern provinces.