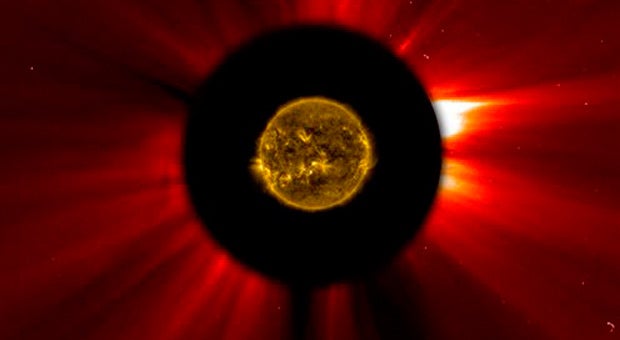 In a composite image provided by NASA, Comet ISON nears the sun in an image captured at 10:51 a.m. Eastern Standard Time on Thursday, Nov. 28, 2013. The sun was imaged by NASA’s Solar Dynamics Observatory, and an image from ESA/NASA’s Solar and Heliospheric Observatory shows the solar atmosphere, the corona. Scientists are studying spacecraft images to find out whether a small part ISON survived its close encounter with the sun. (AP Photo/ESA&NASA SOHO/SDO)

STOCKHOLM  — A comet that gained an earthly following because of its bright tail visible from space was initially declared dead after grazing the sun. Now, there is a sliver of hope that Comet ISON may have survived.

New images being analyzed Friday showed a streak of light moving away from the sun that some said could indicate it wasn’t game over just yet.

“It certainly appears as if there is an object there that is emitting material,” said Alan Fitzsimmons, an astronomer at Queens University in Belfast, Northern Ireland.

Basically a dirty snowball from the fringes of the solar system, scientists had pronounced Comet ISON (EYE’-sahn) dead when it came within 1 million miles (1.6 million kilometers) of the sun Thursday.

Some sky gazers speculated early on that it might become the comet of the century because of its brightness, although expectations dimmed over time. But it wouldn’t be all bad news if the 4.5-billion-year-old space rock broke up into pieces, because some scientists say they might be able to study them and learn more about comets.

The European Space Agency, which had declared ISON’s death on Twitter late Thursday, was backtracking early Friday, saying the comet “continues to surprise.”

Comet ISON was first spotted by a Russian telescope in September last year, and became something of celestial flash in the pan this week for its vivid tail — visible by the naked eye — and compelling backstory of impending doom.

The comet was two-thirds of a mile wide as it got within 1 million miles (1.6 million kilometers) of the sun, which in space terms basically means grazing it.

NASA solar physicist Alex Young said Thursday the comet had been expected to show up in images from the Solar Dynamics Observatory spacecraft at around noon Eastern time (1700 GMT), but almost four hours later there was “no sign of it whatsoever.”

Images from other spacecraft showed a light streak continuing past the sun, but Young said that was most likely a trail of dust continuing in the comet’s trajectory.

However, instead of fading, that trail appeared to get brighter Friday, suggesting that “at least some small fraction of ISON has remained in one piece,” U.S. Navy solar researcher Karl Battams wrote on his blog. He cautioned that even if there is a solid nucleus, it may not survive for long.

Two years ago, a smaller comet, Lovejoy, grazed the sun and survived, but fell apart a couple of days later.

“This is what makes science interesting,” said Fitzsimmons, who specializes in comets and asteroids. “If we knew what was going to happen, it wouldn’t be interesting.”

ISON’s slingshot toward the sun left astronomers puzzled and excited at the same time.