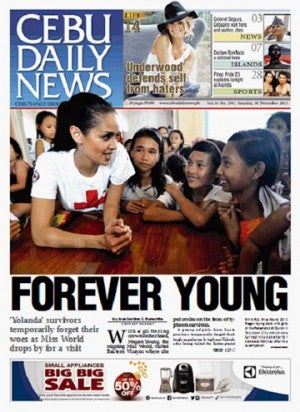 With a glittering crown on her head, Megan Young, the reigning Miss World, visited Eastern Visayas where she put smiles on the faces of typhoon survivors.

A group of girls from Leyte province temporarily forgot their tragic experiences in typhoon Yolanda after Young visited the Redemptorist Church in Tacloban City yesterday and reminded them not to let the devastation brought by the storm wash their dreams away.

Laughter filled the church which serves as an evacuation center as children and awe-struck survivors followed Megan around and gave her flying kisses.

An ABS-CBN news video showed children pressing letters and their drawings into the hands of the reigning Miss World. She kept them in her bag and later showed them to reporters who attended her press conference in Cebu City.

“I’m thinking of something special. I have something in mind. But for now, I’m keeping it real close to me at the moment,” she said when asked what she plans to do with the drawings.

Young, who wore a Red Cross T-shirt, joined a Red Cross team that brought relief items to evacuation centers in Tacloban City, and the towns of Tanauan, Basey and Ormoc City.

Young and her group flew back to Cebu where she called on Cebu City Mayor Michael Rama.

“I’m happy to put a smile on their faces. Now is the time when it’s not about receiving, but for them to do their part as well,” she told reporters at City Hall.

“Yung mga ngiti nila abot langit. Masayang-masaya sila sa pagdating namin,” she said. (Their smiles reach up to the heavens. They were very happy to see us.)

Organizers of the Miss World allowed Young to wear her crown during her visit to Eastern Visayas.

“We let her wear the crown because it brings a sense of hope to the children that a fairytale princess visited them. Seeing their expression, it was worth bringing the crown all the way from London,” said Miss World Events Director Steve Douglas.

“She came on her own. She volunteered herself to work with the Red Cross. We are about getting people back on their feet. This is not a defeated people. These are people of dignity and great strength,” the former senator said.

In her worldwide campaign with the Miss World to gather funds to help the typhoon victims, Megan has so far collected $1.2 million, according to Douglas.

These are from her visits and fund-raising activities in the countries of United Kingdom, United States, Hong Kong and Indonesia

Douglas said Megan will fly to China on December 3. She will then go back to the US as well as in UK to continue her fund raising advocacies. She is expected to come back to the Philippines by February this year.

Tomorrow, Megan will visit Bohol which was badly hit by a 7.2-magnitude earthquake in October.