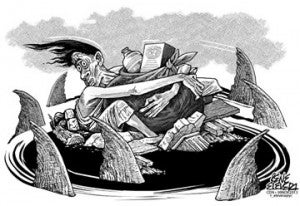 With relief goods still coming, the government’s focus now is on rebuilding damaged towns and cities in north Cebu and Eastern Visayas. Congress for once acknowledged the urgency of the undertaking by listing P100 billion as a rehabilitation fund.

However, there are mixed signals from government and outside sectors indicating that the amount may be inadequate to fully address the damage wrought by supertyphoon “Yolanda.”

Budget Secretary Florencio Abad was even more blunt when he said that total rehabilitation would be completed beyond President Benigno Aquino III’s term in 2016. And that’s if, a very big IF, every centavo is used and accounted for to fund the ambitious projects to bring northern Cebu and eastern Visayas back on its feet.

Realizing that target is easier said than done as evidenced by the billions of pesos stolen from the Filipino people by businesswoman Janet Lim-Napoles and her cabal of lawmakers who conspired to enrich themselves at the public’s expense.

It’s an understatement to say that the Aquino administration has a big job ahead to rehabilitate and restart the economy after the damage wrought by wave after wave of natural calamities of which Yolanda and the earthquake are the latest unwelcome visitors.

This is where public vigilance by the media, private citizens and groups can come in. The relief campaign may be coming to a close because victims shouldn’t be made to rely on the generosity of donors forever. A growing number just want to resume their livelihood.

And just as there are sharks and predatory creatures circling around the largesse donated by the world to calamity victims, just waiting for the chance to pounce and steal it like Napoles and her brood, these same thieves and bloodsuckers would salivate at the chance to feast on the bonanza of funds for rebuilding.

We shouldn’t let it happen again, whether it’s called PDAF or simple greed.

Local governments should also do their part to guard and use those funds well.

The local governments in Cebu and Eastern Visayas, whose areas were devastated by Yolanda should, like their constituents who want to resume their livelihood, stand up and raise their own funds to rebuild their communities.

Cebu Gov. Hilario Davide III is fortunate to be able to tap the expertise of his agriculturist uncle Dr. Romulo Davide in planting typhoon resilient crops.

He can also expand his team to appoint former and even incumbent officials to help in the rebuilding process. He could consider inviting former governor Lito Osmeña, under whose watch Cebu province quickly recovered from the devastation of 1990’s typhoon “Ruping”.

Long after the donors have gone, it’s up to survivors and local leaders to pick themselves up and move on.