Eastern Samar lost everything to storm, except peace, order 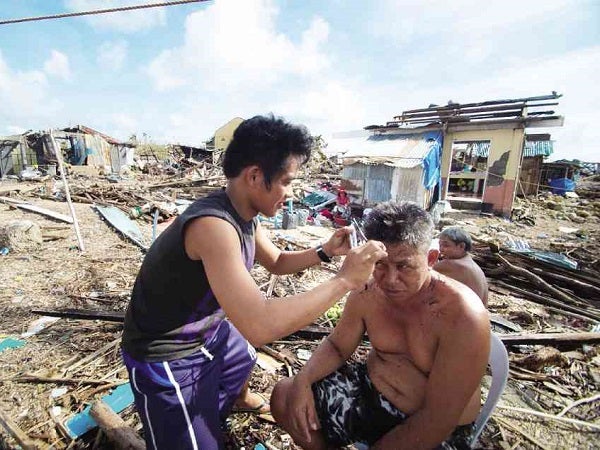 AMID a scene of utter destruction, a man finds time to cut his neighbor’s hair in a village in Giporlos, Eastern Samar. RICHARD BALONGLONG/INQUIRER NORTHERN LUZON

GUIUAN, Eastern Samar—All the elements of a collapse of law and order were there. People were hungry, weary and vulnerable.

Yet, in the weeks that followed Supertyphoon “Yolanda” in the province, no crime has been reported in its 12 towns, which had been all but wiped out by the storm.

“Our policemen did their best to rise from the destruction and maintain order in their areas. Let us not forget that they are also typhoon victims,” said Senior Supt. Allan Cuevillas, acting Eastern Samar police chief.

He said there was just a single incident listed on the police blotter of this town—a fistfight between two relatives over packs of relief goods.

“There were attempts at looting in the early hours after the typhoon struck, but this was not as massive as those in other areas. These were immediately stopped after our policemen reorganized and took control of the situation,” he said.

The peace and order situation here was stable even as the area saw an influx of volunteers and relief workers, including foreigners, who were attending to the needs of the victims.

“All our police stations are now functioning normally,” he said. Policemen are also now helping in relief efforts, he said.

The absence of crime following Yolanda elated Dante Jimenez, of the Volunteers Against Crime and Corruption, who was in the area with a group of volunteers to distribute relief and conduct medical missions in the southern coastal towns of Quinapondan, Giporlos, Balangiga and Lawaan.

Jimenez confirmed the report after visiting the police station in Quinapondan, one of the province’s worst-hit coastal towns.

“Praise the Lord. This is a miracle,” he said, adding that his group is commending the police force in the province.

From Guiuan to Borongan City, villagers tried to rise from the destruction. Newly built nipa huts lined the roadsides, draped with blue-and-orange plastic-woven tarpaulin, amid debris of houses and trees destroyed by Yolanda.

In other villages reached by aid, people, mostly women and children, patiently lined up in front of distribution centers, sometimes even in the middle of a heavy downpour, to get their ration of relief—2 kilograms of rice, three canned goods and two bottles of water.

Other packs that were given out contained used clothing, slippers or shoes.

On Wednesday, people lined up in front of the town hall in Balangiga for a free medical mission.

Tents given out by foreign donors had been pitched in other villages, some housing as many as five families.

“Our village officials told us to put them up, even if we will not be staying here for the night. What matters is that it must be seen built,” Rodolfo Biderio, 68, said.