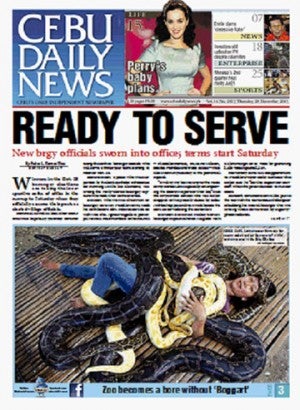 Winners in the Oct. 28 barangay elections are taking their respective oaths of office in the run-up to Saturday when they officially assume their posts as elected village officials.

Provincial as well as local chief executives were kept busy yesterday administering the oath to barangay officials who will serve a three-year term starting at noon of Nov. 30.

Oscar Banzon, a priest who was suspended by the local Catholic archdiocese for running in the last elections, was among the newly-elected barangay captains who took their oaths of office.

Banzon, who won as chairman of barangay Kawit in Medellin town, took his oath before Gov. Hilario Davide III with Vice Gov. Agnes Magpale as principal witness. Four members of his council — Flordeliz Forteza, Faustino Villarin, Rosalie Meralles and Tirso Seares – were also sworn in yesterday at the provincial capitol.

“I will try my best to answer the needs of my constituents especially on improving the different aspects of their life,” said the 55-year-old Banzon who was earlier stripped of his priestly duties by Cebu Archbishop Jose Palma a week before the Oct. 28 for violating the Canon law.

His victory came as a disappointment to Medellin Mayor Ricky Ramirez who earlier said he “lost his respect for Banzon” when the priest decided to run for office.

Banzon’s administration will be put to the test with the tremendous challenge of rebuilding his coastal barangay that was among those devastated by supertyphoon Yolanda.

He said Davide assured him of the provincial government’s support.

The seaside barangay of Kawit with 15 sitios and more than 4,355 registered voters is the biggest barangay in the sugarcane-producing town.

Cadungog, a vocal critic of the mayor, said that since the election is over, the time has come for them to cooperate with the mayor and make sure that their projects get City Hall support.

After the oath-taking ceremony, Cadungog immediately reminded Rama of his need to approve the P3 million rehabilitation project for Gaisano Street located near their barangay hall.

The Tejero officials were invited to the mass oathtaking which was organized by the Office of the Mayor in Nov. 11 but they did not show up.

Before the swearing in rites started, Cadungog sent a text message to former mayor Tomas Osmeña, the titular head of the BO-PK, and told him about their appearance at City Hall as a courtesy to their political leader.

In his speech Mayor Cortes urged the barangay officials to start their tasks in serving the people with their respective commitments. “I know that you are more than capable of making sure that your constituents are justified with their choice of leaders,” he said. Cortes called on the community politicians to forget their conflicts and start to serve the people. “Always remember that what was handed to you by the people is not the position of power. It is a mandate to serve. It was not a privilege of the few but rather than it is a privilege to serve the many,” he said. / with Chief of Reporters Doris Bongcac and Reporter Jucell Marie Cuyos