‘Please help us, we’re victims too’ 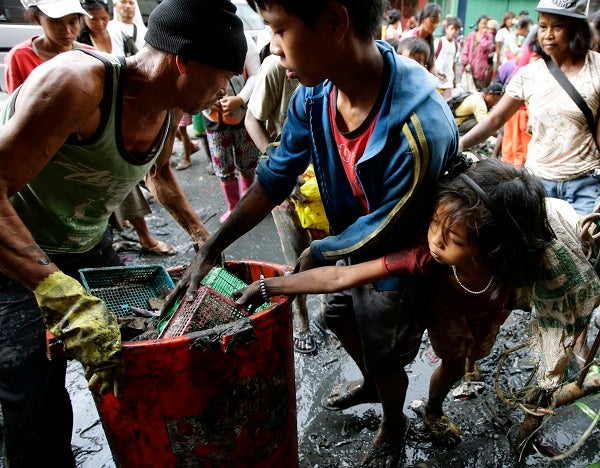 Typhoon survivors scramble to be among the first to rummage through muddied items being brought outside a damaged grocery store by workers of the store, Wednesday, Nov. 27, 2013, in Tacloban city. Eastern Samar Gov. Conrado Nicart Jr. said typhoon survivors in his province lamented that much of the attention on relief and rehabilitation had been focused on Guiuan and Tacloban City, when many of the southern towns were as equally devastated. AP PHOTO/BULLIT MARQUEZ

“Can you please give us relief goods? We’re victims, too,” she said, pointing to her house, its roof blown off by the typhoon’s 300-kilometer per hour winds.

Saliwan’s sentiment was shared by officials and residents in many parts of the province, mostly the southern coastal towns which, like Guiuan, absorbed the typhoon’s swirling winds and storm surges as high as 20 feet.

Eastern Samar Gov. Conrado Nicart Jr. said typhoon survivors in his province lamented that much of the attention on relief and rehabilitation had been focused on Guiuan and Tacloban City, when many of the southern towns were as equally devastated.

“That perception is expected. The public may not be too aware that there are other areas that were likewise badly hit. That is what we [in the provincial government] are trying to address,” he said.

Aside from Guiuan, the towns of Mercedes, Salcedo, Quinapondan, Giporlos, Balangiga and Lawaan, were pummeled by the typhoon before it hit Tacloban City.

The other coastal towns of Hernani, Llorente, Balangkayan and Maydolong and Borongan were severely damaged from the storm surge whipped up by the typhoon.

“We believe Guiuan is already okay as far as relief assistance is concerned. We are trying to penetrate the far-flung areas that have not been supplied because roads have just been cleared,” he said.

But as relief operations here entered their second week, residents noted the increasing volume of aid to the province’s interior areas that were previously not attended.

Quinapondan Mayor Nedito Campo said he was thankful that help was starting to trickle in, after several days that his constituents were helplessly watching convoys of relief trucks pass by their devastated villages.

“Most, if not all, of the nine coastal towns of Eastern Samar were severely, horribly affected by the typhoon. That’s why we are calling on all goodhearted [people and organizations] to also help us,” he said.

Campo said people in these villages were left with nothing with which to rebuild their lives.

“We lost our homes and our fishing boats were destroyed. Nothing was left of our coconut trees, from which many of us here depended on for livelihood. Our ricelands had been inundated by water from the sea,” he said.

Campo dismissed allegations that local officials have been controlling the release of donated relief goods, often stocking them at the town hall.

“Our policy here is that when the goods arrive, these must be distributed immediately to the people because we know they need these most. We cannot afford to hear of complaints from our constituents that some families did not get their rations,” he said.