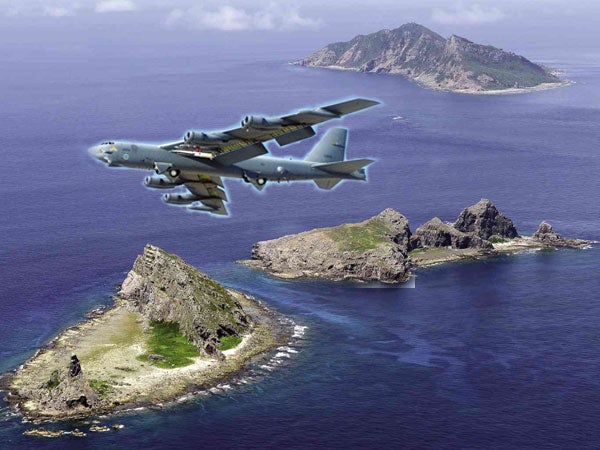 FREEDOM TO FLY In this composite photo, a US B-52 Stratofortress bomber flies over the Senkaku Islands in the East China Sea that the Chinese call Diaoyu Islands. Beijing on Wednesday said it monitored two B-52s flying over the islands in defiance of its declaration of an ‘air defense identification zone’ in the area. AP/AFP

WASHINGTON—Days after China asserted greater military control over a swath of the East China Sea to bolster claims to a cluster of disputed islands, the US defied the move Tuesday as it flew two B-52 bombers through the area.

China, however, insisted Wednesday it has the capacity to enforce its controversial newly declared air zone over islands disputed with Japan, despite Beijing’s reluctance to intervene after American B-52 bombers flouted its rules.

The US said what it described as a training mission was not flown to respond to China’s latest military maneuver, yet the dramatic flights made clear that the US will not recognize the new territorial claims that Beijing laid out over the weekend.

The two unarmed US B-52 bombers took off from their home base in Guam and flew through China’s newly designated air defense zone, then returned to base, US officials said. The bombers were in the zone for less than an hour, thundering across the Pacific skies during midday there, the officials said, adding that the aircraft encountered no problems.

Beijing’s non-confrontational response elicited scorn from some Chinese netizens as weak in the face of defiance, but analysts said it may never have intended to impose the zone by force.

“The Chinese government has the will and ability to defend our national sovereignty and security,” foreign ministry spokesman Qin Gang said at a regular press briefing.

China’s claim:Islands have been part of its territory since ancient times.

Japan’s claim: Japan erected sovereignty marker on the islands in 1985, incorporating them into its territory as part of the Nansei and Shoto islands.

“We also have the ability to exercise effective control over the East Sea Air Defense Identification Zone,” (ADIZ) he said.

While the US insisted the training mission was long-planned, it came just days after China issued a map and a new set of rules governing the zone, which includes a cluster of islands that are controlled by Japan but claimed by Beijing.

US officials would not publicly acknowledge the flights on Tuesday, but State Department spokeswoman Jen Psaki said China’s move appeared to be an attempt to change the status quo in the East China Sea.

“This will raise regional tensions and increase the risk of miscalculation, confrontation and accidents,” she told reporters.

China said Saturday that all aircraft entering the new air defense zone must notify Chinese authorities and are subject to emergency military measures if they do not identify themselves or obey Beijing’s orders. US officials, however, said they have received no reaction to the bomber flights from the Chinese.

The bomber mission underscores Washington’s immediate rejection of China’s new rules. The US, which has hundreds of military aircraft based in the region, has said it has zero intention of complying. Japan likewise has called the zone invalid, unenforceable and dangerous, while Taiwan and South Korea, both close to the US, also rejected it.

White House spokesman Josh Earnest would not specifically comment Tuesday on the military flights. “It continues to be our view that the policy announced by the Chinese over weekend is unnecessarily inflammatory and has a destabilizing impact on the region,” he told reporters traveling with Obama in Los Angeles.

The US mission took place between about midnight Monday and 3 a.m. EST, said the officials, who requested anonymity because they were not authorized to speak by name about the flights. The flights were first reported by The Wall Street Journal.

China’s move to further assert its territorial claims over the islands is not expected to immediately spark confrontations with foreign aircraft. Yet it fits a pattern of putting teeth behind China’s claims and could potentially lead to dangerous encounters depending on how vigorously China enforces it—and how cautious it is when intercepting aircraft from Japan, the US and other countries.

While enforcement is expected to start slowly, Beijing has a record of playing the long game, and analysts say they anticipate a gradual scaling-up of activity.

The declaration seems to have flopped as a foreign policy gambit. Analysts say Beijing may have miscalculated the forcefulness and speed with which its neighbors rejected its demands.

At least in the short term, the move undermines Beijing’s drive for regional influence, said Bonnie Glaser, an Asia expert at the Center for Strategic and International Studies in Washington.

“It doesn’t serve Chinese interests to have tensions with so many neighbors simultaneously,” she said.

Denny Roy, a security expert at the East-West Center in Hawaii, said China’s enforcement will likely be mostly rhetorical at first.

“The Chinese can now start counting and reporting what they call Japanese violations, while arguing that the Chinese side has shown great restraint by not exercising what they will call China’s right to shoot, and arguing further that China cannot be so patient indefinitely,” Roy said.

China also faces practical difficulties deriving from gaps in its air-to-air refueling and early warning and control capabilities, presenting challenges in both detecting foreign aircraft and keeping its planes in the air, according to Greg Waldron, Asia managing editor at Flightglobal magazine in Singapore.

Despite that, Beijing has shown no sign of backing down, just as it has continued to aggressively enforce its island claims in the South China Sea over the strong protests from its neighbors.

Tensions remain high with Tokyo over islands in the East China Sea called Senkaku by Japan and Daioyu by China. Beijing was incensed by Japan’s September 2012 move to nationalize the chain, and Diaoyutai by Taiwan, which also claims them.

Since then, Chinese and Japanese coast guard ships have regularly confronted each other in surrounding waters. Japan further angered Beijing last month by threatening to shoot down unmanned Chinese drones that Beijing says it plans to send on surveillance missions over the islands.

Beijing’s move was greeted rapturously by hardline Chinese nationalists, underscoring Beijing’s need to assuage the most vocal facet of domestic public opinion. Strategically, it also serves to keep the island controversy alive in service of Beijing’s goal of forcing Tokyo to accept that the islands are in dispute — a possible first step to joint administration or unilateral Chinese control over them.

Beijing was also responding in kind to Japan’s strict enforcement of its own air defense zone in the East China Sea, said Dennis Blasko, an Asia analyst at think tank CNA’s China Security Affairs Group and a former Army attache in Beijing.

The Japanese zone, in place since the 1960s, overlaps extensively with the newly announced Chinese zone. Japan, which keeps a public record of all foreign incursions into its zone, actually extended it westward by 14 miles in May.

Japan, China in war of words over airspace