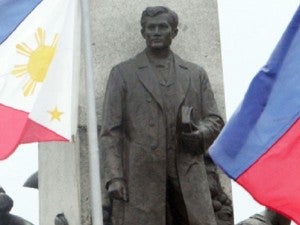 The suspension was sought to give due course to an online petition led by tourist guide and activist Carlos Celdran against the “Terror de Manila” that is expected to mar the sightline of Rizal Monument. The petition has won the backing of 8,000 signatories.

“With so much rich history, Manila did right in taking a stand to preserve Rizal Shrine’s sacred sightline, showing clearly the City policy now of valuing the importance of our cultural legacies,” said Councilor DJ Bagatsing, author of the resolution.

He appealed to DMCI Homes, developer of Torre de Manila, to respect the resolution’s binding authority and hold a dialogue with concerned parties to iron out the issues and find a “delicate balance between heritage and modernization.”

“This sets a significant precedent which essentially ensures the integrity of our national monuments,” Bagatsing said.

The resolution cited the guidelines of the National Historical Commission of the Philippines that the visual dominance of national monuments such as the Rizal Shrine ought to be protected and given due prominence since they have much significance as national symbols.

The vista points and visual corridors of the monuments must be clear for unobstructed viewing appreciation and photographic opportunities, the resolution said.

It added that the DMCI was granted a permit by the previous city building official amid protests from heritage groups and an investigation by the Manila City Council last year.

The planned 41-story, contemporary art deco condo was found to have violated the floor area ratio and height limit in the university cluster zone. It is being constructed behind the site of the old Manila Jai-Alai fronton, an art deco landmark whose demolition several years ago was  very controversial.

Sought for comment, Juan Capuchino, the new city building official, said he will review the context of the resolution and will coordinate with DMCI.