MANILA, Philippines – “I have  never  murdered anyone  during all of my almost 90 years on this planet,”  so said Senate  President  Juan Ponce-Enrile, who was  the Defense Secretary during the Marcos  regime.

Taking  the floor  on Wednesday,   Enrile  answered all the allegations hurled at him by his “obsessive hater,” who described him as “murderous” during a hearing of the Senate blue ribbon committee last November 7.

“Mr. President, I never murdered anyone during all of my almost 90 years on this planet,”  he said in his speech. 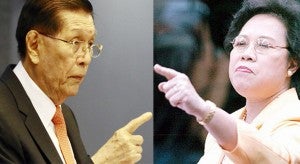 “I was in the war during World War II as a freedom fighter.  I fired bullets against the foreign invaders of our country as they fired bullets at me.  I do not know if I hit any of those I shot at.  But, for someone to say with impunity that I killed someone, whether here or anywhere else, or that I am planning anyone’s murder, is the “Grandmama” of all falsehood fabricators,” Enrile said.

He  also belied Santiago’s  claim  in the same hearing that he brings his bodyguards whenever he goes to the restroom of the Senate.

“Mr. President, I never realized until that blue ribbon hearing that we have a “peeping Tom” in this Senate.  I never knew that someone was keeping an eye on me, even when I go to the most private of places here in this building.  It was, after all, supposed to be a ‘private’ area,” he said.

Enrile did not name Santiago in his speech but he repeatedly described the unnamed senator as his “bitter and obsessive hater.”

“I am sure, Mr. President, everyone in this Senate, including the fabricator of that falsehood, knows that what she said was a boldfaced lie,” he said.

“Mr. President, perhaps my obsessive hater is the only one, in all these years, ever so blessed to see someone carrying a long one in the Senate restroom!”

Enrile said he did not need a firearm to defend himself because  when he was young, he was trained in the native martial arts of arnis and later earned a black belt in the Korean martial art of taekwondo.

“Besides, unlike some persons familiar to me, I do not think I suffer from any kind of schizophrenic or psychotic paranoia to be that paranoid to need someone with a firearm to visit a restroom, especially in this Senate.  True, one of my men normally goes with me to the restroom.  But, he carries no weapon.  He only goes with me to assist me because of my impaired vision,” he said.

“Maybe what my obsessive hater mistook for a long firearm, Mr. President, was a tiny gadget that I bring with me to scratch my back when it itches and to strike down a mischievous langaw (housefly) when I encounter one along the way,” he added.

Enrile also denied Santiago’s accusation that he was the “mastermind” or “brain” of the alleged “pork barrel” scam, “ saying that “only an inane and bitterly hostile mind could fabricate such a canard.”

“Again, all I can say is that this is an outright lie and this is just another of those baseless fabrications against me from a depraved mind,” he said.

But Enrile said he would not belabor this “unfounded canard” as he promised to deal in detail the issue at a proper  time and forum. He also  promised to give his “fullest cooperation  to unearth the truth in that alleged scandal.”

“Perhaps, my obsessive hater should appear as a special prosecutor against me to demonstrate to her admirers her knowledge of the facts of the alleged PDAF scandal and her legal skill as a trial lawyer.  I am sure she will experience something she never experienced before,”  he added.

So obsessive and bitter

“But why is this senator so obsessive and bitter against me?”  Enrile asked himself.

“Many, especially my friends and followers, have repeatedly asked me this question.  Mr. President, I do not know for certain the answer to this nagging question.  I, too, am puzzled. I know of no harm that I did to her to arouse her vile anger and hostility against me.” 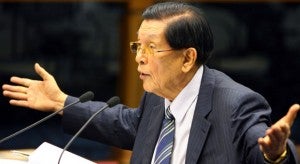 But he surmised that “deep-seated animosity” of this unnamed  senator arose when he opposed  her confirmation as  the  Secretary of Agrarian Reform  and during the time of the late President Corazon Aquino and when he refused to include her in the majority bloc when  he was elected Senate President in 2008 and in 2010.

“During the hearing of the Commission on Appointments on her confirmation as Secretary of Agrarian Reform, testing the suitability and qualifications of the nominee then, I asked her if she was ever under the care of a psychiatrist. She admitted that she was. She said that she was treated by a psychiatrist at the Makati Medical Center,” Enrile said.

“That meant that she obtained low grades in all her bar subjects.  In fact, I remember that she got a grade of 56% in Ethics, the easiest bar examination subject,” Enrile said.

In the same confirmation hearing,  the opposition leader said he also asked about a white Toyota Celica sports car that the nominee then was said to be driving as her personal car when she was a judge in Quezon City.   The said vehicle was then owned  by Toots Trinidad, a former vice president of the Philippine National Bank.

Enrile said Trinidad shipped the car back to the Philippines upon his return from the United States after his surgical operation for a brain tumor at the Standford University but it disappeared from the compound of the Bureau of Customs when it arrived in the Port of Manila.

“Toots Trinidad learned that his sports car was with a judge of Quezon City.  Toots Trinidad asked then Judge Miriam Defensor Santiago to give the car back to him.  She refused,” he said.

“As a consequence of my opposition, and among other concerns taken into consideration, the Committee on Agrarian Reform of the Commission on Appointments voted to reject her appointment as Secretary of Agrarian Reform,” Enrile added.

When he became Senate President in 2008, Enrile said this unnamed senator did not vote for him but was still given two committee chairmanships.

When he got elected again as Senate President in 2010, he said, the unnamed  senator wanted to retain  the two committees, which  both have an oversight committee and large budget

“Obviously, she wanted a large pile of money at her disposal.  But I could not satisfy her desire because the two committees had already been assigned to two other equally-capable senators,” Enrile said.

“Finally, she asked for an oversight committee with a separate budget to be specially created for her to support her large staff.  I accommodated her request without much ado.”

But Enrile said, “Evidently, all those things that I did for her were not enough to assuage her deep-seated and bitter hostility against me for what happened in the past, especially in her confirmation hearing as Secretary of Agrarian Reform.”

Santiago to Napoles: If Enrile is guilty, say so

Santiago deplores senators’ failure to stand up to Enrile