Illinois same-sex couple set to be first to wed 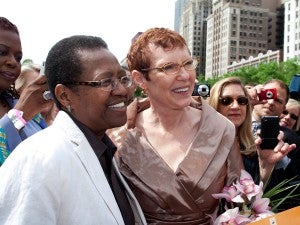 In this June 2011 photo provided by Starbelly Studios in Chicago, Vernita Gray, left, and Patricia Ewert smile during their civil union ceremony at Millennium Park in Chicago. AP

CHICAGO—Illinois’ new same-sex marriage law hasn’t taken effect yet, but the first gay couple to take their vows in the state could do so as early as Wednesday.

Vernita Gray and Patricia Ewert met five years ago. The women, both in their 60s, have been engaged for several years but Gray is terminally ill. She has cancer in her brain and bones and has undergone numerous treatments. Her partner fears she won’t make it until June 1 when the same-sex marriage law goes into effect.

Earlier this week a federal judge allowed the Cook County clerk to issue an expedited marriage license after Lambda Legal and the American Civil Liberties Union of Illinois filed a lawsuit.

The wedding ceremony will be private and could be held as early as Wednesday.