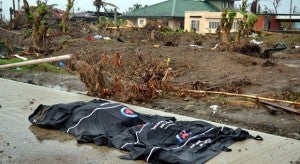 Photo of the cadavers in body bags. Kristine Angeli Sabillo/INQUIRER.net

Updates on fatalities came in trickles as local officials have to submit official reports before they get added to the NDRRMC official count.

The agency also said close to 10 million people were affected by the typhoon. Of these, 3,542,370 persons were displaced.

The fury of the typhoon also damaged over one million houses. The total cost of damage remained at about P24 billion.

Samar folk say they will rebuild town from scratch