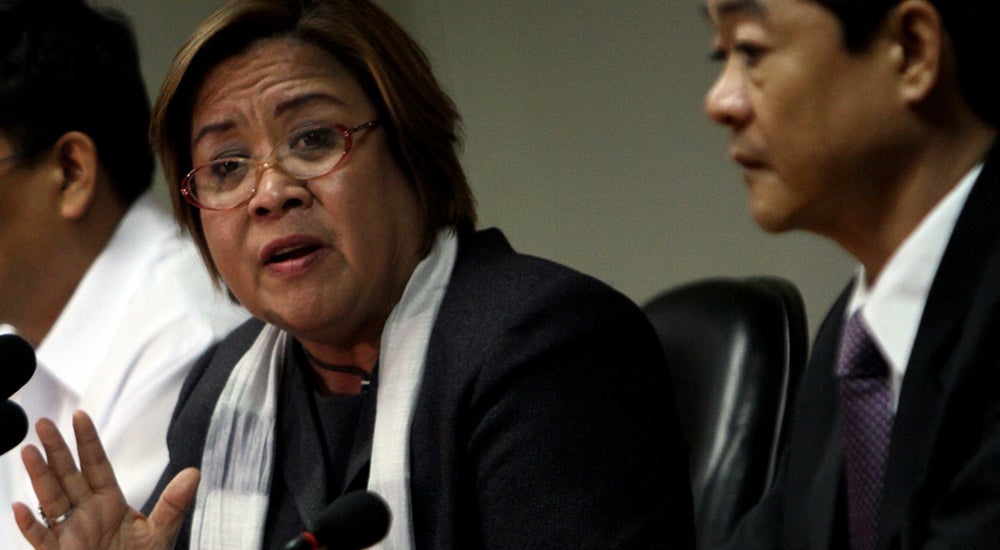 The fake special allotment release order (Saro) scam appears to be much bigger and broader than earlier thought. A Saro is a document issued by the Department of Budget and Management (DBM) that leads to the release of funds for government projects.

Justice Secretary Leila de Lima on Tuesday said that the National Bureau of Investigation had received reports of more fake Saros from other regions in the course of its investigation of bogus Saros for P879 million worth of farm-to-market road projects that were uncovered by regional officers of the Department of Agriculture (DA).

“The NBI is now tracing three more regions that alerted the main office of either the DA or the DBM. They inquired: ‘Is it true that this Saro is for us?’ Apparently, they also saw other fakes,” De Lima said in an interview with Inquirer Radio.

“What the NBI wants to know is where the fake Saros came from and who released them. It’s hard to imagine that there are no DBM officials involved although, of course, I cannot make such conclusive statement,” De Lima said.

In a text message, De Lima said she was told that a staff member of a lawmaker from Region II “hand-carried” the Saro that had the fake signature of Budget Undersecretary Luz Cantor.

“We’re withholding the name of the congressman pending verification or investigation on how he or his staff came in possession of the fake Saro,” the justice secretary said.

De Lima said the NBI would invite the lawmaker’s aide who presented the fake Saro dated Oct. 10 as he dropped by the DA regional office in Cagayan Valley on Oct. 18.

She said the DA was surprised that the aide presented a Saro to the regional office as it was supposed to be the first to know about this since the department was the implementing agency.

The justice secretary said she was wondering why the fake Saro cropped up in October, the same month her office filed plunder charges against those implicated in the P10-billion pork barrel scam allegedly masterminded by businesswoman Janet Lim-Napoles.

“Is there an agenda on this? Are there attempts again to steal the people’s money or is there another agenda? We cannot rule out other agendas,” De Lima said.

“We need to look into what appears to be an insidious scheme or practice of Saro peddling. What is this scheme?” she said.

Agriculture Secretary Proceso Alcala earlier said that several mayors had complained about DBM personnel demanding advances for the early release of their Saros.

De Lima pointed out that both the fake and genuine Saros were identical in terms of the format, security code, date and amount.

“Where did that document come from? Only somebody in the DBM knows these particulars. We are also curious. Did this happen only now? It could be anyone or a group behind this scheme,” De Lima said.

Some DBM personnel have yet to submit sworn statements to the NBI team that was briefed on the step-by-step process in the approval of the Saro, according to the justice secretary.

The NBI agents have been told to expedite the probe, especially because President Aquino was informed of the scam.

No funds were released because money for a Saro comes from the notice of cash allocation (NCA), Abad said in a press briefing on Monday.

But the Saro itself is considered a “currency” that could be used by crooked DBM personnel to demand grease money for its release to recipients like lawmakers and mayors who in turn could demand advances from their contractors, according to a DBM source.

The fake Saro scam was uncovered amid the public outrage over the P10-billion pork barrel scam. The release of Saros triggered the payment of advances to lawmakers whose allocations from their Priority Development Assistance Fund were funneled to dubious nongovernment organizations implementing ghost livelihood projects.

The Commission on Audit has scored the DBM in its latest annual audit report for the DBM management’s poor internal control of Saros, NCAs and other official documents, citing gaps in the numbering sequence and failure to account for the spoiled or damaged Saros or NCAs.

Abad did not reply Tuesday to an Inquirer query. He earlier said that the DBM had centralized the approval process of Saros.

Read Next
Keithley: Life and death of a fighter
EDITORS' PICK
Geek out at TOYCON 2022 powered by Smart Signature
UK’s Boris Johnson will resign, BBC reports
High inflation: Your P1 is now worth only 87 centavos
High-risk pregnancy: Reducing your risk is in your hands
Unemployment rate up to 6% in May
House energy committee chair Arroyo bats for cheap electricity
MOST READ
Suspect in grisly killing of missing woman in Bulacan arrested
Kim Atienza’s daughter flaunts bikini body in response to critics of her ‘revealing photos’
Cop slain in Isabela ambush
FDA probes popular Filipino noodle brand for ‘high level of ethylene oxide’
Don't miss out on the latest news and information.