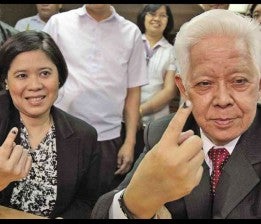 MANILA, Philippines–“Democracy survived the siege. It lives on in Zamboanga City.”

This was Election Commissioner Grace Padaca’s text message to the INQUIRER on Tuesday as she also reported that the voters’ turnout during Monday’s special barangay (village) elections in the southwestern Mindanao city was “high.”

“We could have understood if there was a low turnout of voters in the barangays that experienced the siege. But the turnout was still high,” she disclosed.

Commission on Elections chair Sixto Brillantes Jr. made the same observation after he personally witnessed the influx of voters during the early hours of the polls.

Brillantes, Padaca and Commissioner Al Parreño flew to Zamboanga to personally monitor the village elections there, while Commissioners Lucenito Tagle and Elias Yusoph did the same in the island-province of Bohol.

Parreño said the polls in Zamboanga were “generally good, peaceful and orderly.”

“Approximately 60 percent of the voters took part in the electoral process,” he noted.

He also disclosed that “voting in all polling places in the city started on time…Comelec personnel were also able to set up voting places for residents displaced by the recent siege.”

The regular barangay elections on Oct. 28 were postponed in Zamboanga City following three weeks of gun battles between government forces and renegade members of the secessionist Moro National Liberation Front in September and the massive flooding that occurred afterward.

On the other hand, the polls in Bohol were reset after a 7.2- magnitude earthquake wrought great damage in the province on Oct. 16.

In an e-mail, Padaca said there were 1,488 candidates for barangay chair and 10,929 for barangay councilman in the Central Visayas province.

Padaca had urged voters in the 1,109 villages in Bohol and 98 villages in Zamboanga City to “choose the best” of the 15,347 candidates for barangay chair and councilman.

On Sunday, Comelec Commissioner Luie Tito Guia said the “right to vote” of Bohol and Zamboanga citizens was “protected and assured.”

Guia and Commissioner Christian Robert Liam monitored the elections from the Comelec headquarters in Intramuros, Manila.