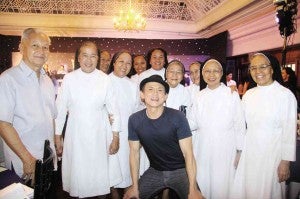 SANTOS and his dad, Joselito (left), with the Benedictine sisters

Individually, Mitch Valdes and Jon Santos would have drawn a crowd.

But together, for the dinner show fund-raiser of St. Scholastica’s Alumnae Foundation Inc. (SSAFI), “A FUNny Kind of Blue,” the comedians performed to a packed audience.

Staged just six days after Supertyphoon “Yolanda” hit Leyte province, it was the alumnae’s response to the havoc left by the typhoon and the needs of the Leyte Benedictine communities, as well as the barangays they were helping.

SSAFI moderator Sr. Angelica Leviste, OSB, said it was also a welcome occasion to laugh and begin to heal together after the week’s difficulties. 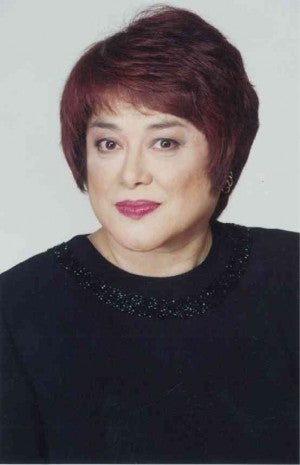 Valdes is always well-loved by Scholasticans. With her extraordinary wit, she made the alumnae feel nostalgic for their own youth on campus, as the performer talked about the heavily starched gym clothes and bloomers students had to wear, and the Spartan rigor and discipline of the German Benedictines, especially the legendary Sister Odiliana who called her a harlot, a word she had to look up in the dictionary.

Valdes recalled being punished in high school when she spoke her mind and fought for her rights as a woman. Women’s rights are, of course, the advocacy now of former SSC president Sr. Mary John Mananzan.

The audience could not have enough of Valdes’ stories and irreverent sense of humor. Although she poked fun at the nuns, she also expressed her appreciation for their concern and how they had always greeted this true-blue Scholastican, “We are praying for you.”

Completing the evening’s entertainment were Scholastican alumnae the Fernandez sisters, Hot Flashes, Replay Band and a delightful group of greying senior citizens who reminded the audience of the aging Lettermen and sang songs from the 1960s. 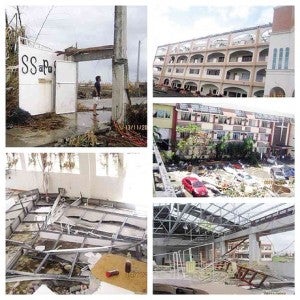 Santos was delighted by the group’s name, “The Emphysema,” but feigned confusion and called it “The Eczemas.”