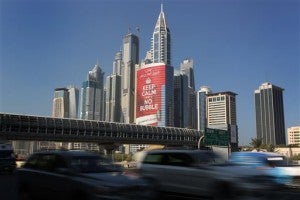 In this Wednesday Nov. 13, 2013 photo, vehicles pass by a tower with a sign that reads, “Keep Calm, No Bubble,” at the Marina district in Dubai, United Arab Emirates. The logo for Dubai’s bid to host the Expo 2020 reflects a push by the city’s leaders to avert another financial crisis like the one that brought the city to its knees in 2008. AP FILE PHOTO

DUBAI, United Arab Emirates—Climb Mount Kilimanjaro, Africa’s highest peak, and you might spot an unusual banner: A flag placed by six climbers emblazoned with the logo of Dubai’s bid to host a World’s fair in 2020.

In Dubai, the logo is also plastered on police cars, convenience store bags, storefronts, taxis, receipts, government buildings and even on new resident visa forms. Countdowns to Wednesday’s decision of who will host Expo 2020 also appear on one of Dubai’s main highways and in one of its main English-language daily newspaper.

Dubai’s rulers say their futuristic city of skyscrapers is ideal to host the event. But their well-oiled public-relations campaign belies a worry among many in the United Arab Emirates city that increased building and real-estate speculation driven by the event could put it on the cusp of another financial crisis.

“People are betting on what’s to come rather than what’s really here,” said Faris Mansour, director of Mubadala Pramerica Real Estate Investors. He spoke on a panel at a recent real estate conference during a discussion on whether Dubai was in recovery or not.

While the World’s fair no longer holds the popularity of other global events like the Olympics or World Cup, it remains a chance for millions of people from around the world to discuss and see the business of the future. Dubai is competing with Yekaterinburg in Russia, Izmir in Turkey and Sao Paulo to host Expo 2020.

Dubai’s rulers say the city of 2.2 million people— most of them foreigners—is a perfect fit to host the exhibition. It is home to the world’s tallest building, the Burj Khalifa, one of the world’s largest malls, a man-made island shaped like a palm tree and an indoor ski slope.

A spending spree is already underway in Dubai for the expo—even before officials announce this week which city will host it. Authorities say they will build an entirely new city with a university around the exhibition pavilion that would host the expo in what is now still a desert near the Jebel Ali seaport, one of the world’s busiest. That’s where the Emirates is building what it hopes will be the world’s biggest airport.

The city’s logo for the expo, an interconnected, geometrical Arabesque design, also mirrors how its leaders see Dubai, as a geographical link between Europe and Asia.

“We are ready to host the world in 2020 and we are fully capable of organizing the best event ever in the history of this global gathering,” Dubai ruler Sheik Mohammed bin Rashid wrote on his Twitter page last month.

Despite the Dubai expo’s planned theme of sustainability, not all World’s fairs have been profitable. The last world expo in Shanghai in 2010 was a success that showcased China’s rise as a modern industrial power. However, the Hanover, Germany, fair in 2000 drew far fewer visitors than expected and lost an estimated $1 billion.

Dubai estimates a successful Expo 2020 bid will generate $23 billion between 2015 and 2021, or 24 percent of the city’s gross domestic product. They say total financing will cost $8.4 billion. They believe some 17.5 million visitors from outside the Emirates will come to Dubai for the six-month long event.

Since the United Arab Emirates’ unification 42 years ago, Dubai has evolved from a desolate corner of the Arabian Peninsula into a global hub for business. Its residential property boom over the years has been a magnet for the world’s super rich. Recent investors include Syrian, Libyan and Egyptian millionaires waiting out unrest back home.

Regional instability combined with efforts to rebound from the financial crisis have resulted in soaring Dubai property rates, up by around 20 percent since last year—the world’s largest year-on-year average price increase. In some neighborhoods, rents skyrocketed by more than 40 percent.

Lurking beneath Dubai’s massive push are fears it is headed toward another real estate bubble whether it wins the bid or not. Some analysts argue hosting the expo can help avert another crisis, while others say a massive building project for the expo will create another boom-and-bust cycle like the one that brought the city to its knees in 2008. Dubai saw property values slashed by more than half and the city’s government ultimately needed a $10 billion bailout from oil-rich neighbor Abu Dhabi in 2009.

Mansour, director of Mubadala Pramerica Real Estate Investors, predicts the real estate market will fall and correct itself in the next 18 to 24 months.

“The (investment) capital is temporary and can quickly move out,” Mansour warned.

A report by the Emirates-based branch of Chartered Financial Analysts Institute found 55 percent of surveyed investors worry a successful bid will create another economic bubble. Only a quarter of the 215 people surveyed believed the Emirates had done enough to make its economy immune to another crash.

Another report by Bank of America Merrill Lynch Global Research said there are “a number of uncertainties surrounding tourism forecasts and spending” in Dubai’s expo projections. However, it also said the event could raise Dubai’s GDP during the fair by 2 percent.

U.A.E. Minister of Economy Sultan Al Mansoori told the state-backed Gulf News daily that an Expo win would be positive for the economy.

“We are making sure there will be no bubble if we win,” the newspaper quoted him as saying.

A fire-red poster the length of a towering building overlooking Dubai’s main thoroughfare advertising a real estate website is one of the most vivid displays of the city’s fears. In in Arabic, it says, “Be assured, the real estate market is well.”

In English, it simply reads, “Keep calm. There’s no bubble.”

Hot desert sands and icy snow in a mall, Dubai is a city of contrasts and superlatives