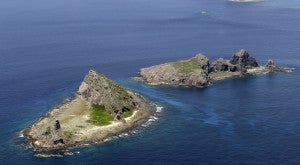 In this Sept. 2012 photo, the tiny islands in the East China Sea called Senkaku in Japanese and Diaoyu in Chinese are seen. The Chinese Defense Ministry on Saturday, Nov. 23, 2013, issued a map of an East China Sea Air Defense Identification Zone that includes a chain of disputed islands also claimed by Japan, triggering a protest from Tokyo. AP

BEIJING – Japan is “hypocritical and impudent” for complaining about an air defense zone Beijing set up over waters hotly disputed by the Asian powers, Chinese state-run media said Monday, ramping up the rhetoric.

China set up the air defense identification zone (ADIZ) on Saturday in an area which includes Tokyo-controlled islands claimed by Beijing, a move which was designed to guard against “potential air threats”, defense officials said.

Japanese Foreign Minister Fumio Kishida said Sunday his country could not accept the Chinese measure, calling it “a one-sided action which leads us to assume the danger of unpredictable events on the spot.”

US Secretary of State John Kerry said Washington was “deeply concerned” over a move which could create “risks of an incident”.

“This unilateral action constitutes an attempt to change the status quo in the East China Sea,” Kerry said.

US Defense Secretary Chuck Hagel reiterated that the Japanese-administered Senkaku islands – which the Chinese claim and call the Diaoyu – fell under the US-Japan security treaty, meaning that Washington would defend its ally Tokyo if the area is attacked.

The row over the islands has festered for years but reached fever pitch in 2012 after Tokyo bought some of them from their private owners.

China has since repeatedly sent coastguard vessels and other state-owned ships as well as aircraft close to the islands, sometimes breaching what Japan is its airspace and territorial waters around them.

Qin also urged the US not to take sides over the issue and said Beijing had “lodged representation” with US ambassador Gary Locke over the American response, calling for Washington to “make no more inappropriate remarks”, Xinhua added.

An editorial in the Global Times newspaper, which is close to China’s ruling Communist Party, weighed into the debate, accusing Japan of double standards as it had set up its own ADIZ as close as 50 kilometers (31 miles) to Russia and 130 kilometres from China.

“Tokyo is hypocritical and impudent in its complaint with Beijing,” the editorial said.

“China has every fair and legitimate reason to establish its own air defence zone.”

The newspaper claimed that “Washington has given a rather vague response”, while warning its Asian neighbour against taking action in the zone.

“China has not declared any target by setting up the air defense zone but will definitely respond to unscrupulous provocateurs to the zone.”

China objects to US over sea defense zone remarks