TACLOBAN CITY, Philippines – “Tuloy ang buhay (Life goes on)!” a passerby shouted happily at the INQUIRER.net team taking footage of a piece of “lechon” (roasted pig) being sold in this city.

Elsewhere, small tables were set-up, showcasing toiletries, noodles, beer and cigarettes for sale. Occasionally, one would see people crowding around a table to buy a kilo of meat.

In the community of San Jose, Rochel Esperas and his brother were butchering a pig, one of the three that survived the fury of Supertyphoon “Yolanda” last November 8. Around them, people were tending to their damaged homes.

Esperas said they were going to sell the pig at P200 per kilo to earn a living and to help supply meat in the typhoon-ravaged city.

“This is the second one we’ve butchered,” he said, adding that only three of their eight pigs survived the storm surge that hit Tacloban City.

Asked if they were able to sell the first one, he said, “Yes. People are now able to buy but only those who still have money.”

Esperas said the money they earn will also be used to buy additional livestock.

“We’ll keep some of the meat for our own food,” he added.

Jeffrey Escobar was also hoping to earn cash. In one corner of the neighborhood, he was selling instant coffee, noodles and even small fishes.

He used to be a fisherman. But when the water rose and engulfed their coastal community, he went to live with his relatives in a makeshift house farther from the shore.

“We chipped in (to buy these). We’ve just started two days ago. There are no more stores here,” Escobar said, saying  he had  go to Catbalogan earlier to get whatever their money could buy.

“Most of the items are of regular prices but the noodles are already worth P15 (in Catbalogan),” he said as he showed off his wares. He now sells the noodles at P20 per pack. 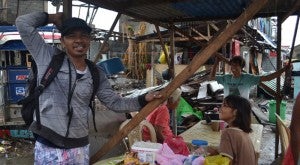 In this photo is Jeffrey Escobar, who now sells noodles at P20 per pack to earn money in the “Yolanda” aftermath. Photo by Kristine Sabillo/INQUIRER.net

Escobar said the relief goods that they got were not enough so he decided to try selling food since he lost his boat to the storm.

A few steps away, Gerald Villamor was rebuilding his home and a tiny sari-sari store.

The table in front of his house was filled with packs of cigarettes and detergent powder.

Villamor admitted to INQUIRER.net that he bought the items from looters after his store was washed out by the storm surge.

Depending on the brand, he buys each pack of cigarettes at around P15 to P30 and sells it for P20 to P40.

He said his brother, who was also setting up his own sari-sari store, gave him sachets of detergent he took from a warehouse in exchanged for cigarettes.

During the onslaught of Supertyphoon “Yolanda,” Villamor hid inside the bathroom and when the water rose to the second-floor of his house, he climbed the roof with his brother.

Ramilo Naldacaso is also looking forward to go back to fishing and build his new home.

“We’re going to build a new home. A nipa hut,” he told INQUIRER.net while waiting for his visiting brother to board a C130 plane at the Tacloban City airport.

For someone who lost a brother during the surge of water and debris in the coastal neighborhood, Naldacaso remained hopeful.

He said their village was among the hardest-hit by the typhoon, killing at least 68 of their neighbors.

“Each one of us was holding plastic containers as we were drifting with the surge. We swam and we swam until we were able to reach a pile of debris,” he said.

His brother, however, got separated and drowned.

Naldacaso, like many typhoon survivors, said they did not expect the water to rise so high. Even his family who were staying in the evacuation center experienced the surge but were thankfully safe.

“We thought the concrete house beside us would shield us from the typhoon, but even that crumbled and its owner killed,” he said.

Now, he and his neighbors are starting to pack their things, eager to return to their village and regain their lives. The water though in their areas was not yet clear and many of their people are suffering from minor illnesses like persistent coughing but he said they are struggling to recover.

Naldacaso said he is going to find a new boat and a net as he cheerfully recalled how they would drop the net into the sea and catch crabs.

“We’re going back to our village. This time, when they raise the storm signal, we’re going to be alert,” he said.

“We’re going to start anew,” he said smiling, hoping for a better future within his reach.

In San Jose, Tacloban City, several body bags littered the streets. Residents claimed many corpses were still buried under the debris while others were still floating in the sea or fishponds.

Many lost their houses. In one street, Christmas décor haphazardly hung on a dead tree, garbage and debris stacked below it. Nearby, residents were repairing their houses or building new ones. A handful of people were selling goods.  Elsewhere, large groups of locals were cleaning up their communities.

A day before the fight of congressman and boxing icon Manny Pacquiao, residents posted a hand-made banner along the main street, which reads:  “We will win this fight. Laban Tacloban (Fight Tacloban)!”