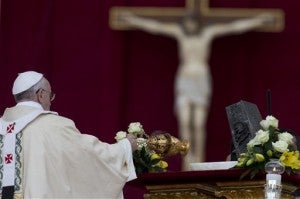 Pope Francis blesses the relics of St. Peter as he celebrates mass for the end of the Year of Faith, in St. Peter’s Square at the Vatican, Sunday, Nov. 24, 2013. AP

VATICAN CITY — The Vatican has for the first time publicly unveiled a handful of disputed bone fragments said by some to belong to the first pope, St. Peter.

The eight or so pieces of bone sat nestled like rings in a jewel box inside a big bronze display case on the side of the altar during a Mass commemorating the end of the Vatican’s yearlong celebration of the Christian faith.

Pope Francis prayed before the fragments, blessing them with incense, at the start of Sunday’s service.

No pope has ever definitively declared the fragments to belong to the Apostle Peter, but Pope Paul VI in 1968 said fragments found in the necropolis under St. Peter’s Basilica were “identified in a way that we can consider convincing.”

Some archaeologists dispute the finding.