No letup in quest for justice 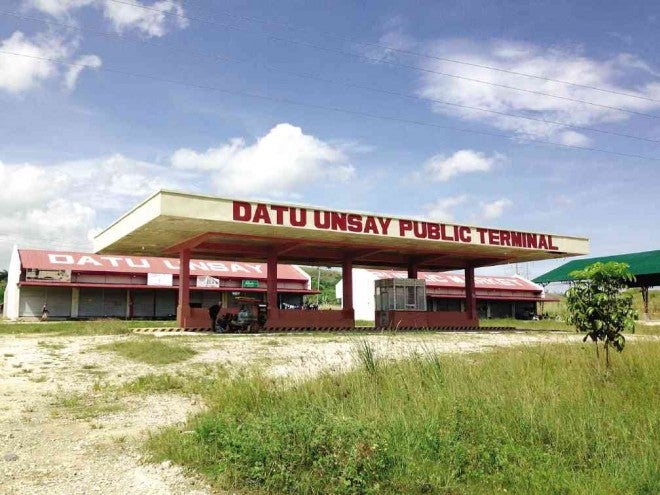 A PUBLIC transport terminal in Datu Unsay town in Maguindanao is empty as the town continues to be a stronghold of Andal Ampatuan Jr., one of the principal accused in the Maguindanao massacre. NICO ALCONABA

Governor Esmael Mangudadatu vowed no letup in the quest for justice for the 58 people, including his wife, who were killed in the Nov. 23, 2009, massacre in this town.

“Even if I’m the only one left fighting, I will continue,” Mangudadatu said in an interview with the Philippine Daily Inquirer.

Mangudadatu, however, will not be alone in his fight as relatives of media workers who were killed in the massacre vowed to do the same.

On Thursday, families of the murdered media workers from the cities of General Santos and Koronadal visited the massacre site in Barangay Salman here where they heard Mass, lit candles and offered flowers.

The group decided to visit two days before the actual commemoration, saying it will be too crowded on Saturday.

Nancy de la Cruz said she and her group would “fight the case to the end.”

Mangudadatu said he would visit the massacre site on Saturday. He lost his wife Genalyn, two sisters, relatives and supporters in the massacre. Thirty-two media workers were among those killed. The group was in a convoy on its way to Shariff Aguak town to file Mangudadatu’s certificate of candidacy for governor when they were attacked.

It was the first time somebody challenged the Ampatuans’ hold on power in the province. Andal Ampatuan Jr., then mayor of Datu Unsay town, was running for governor then.

Witnesses said Andal Ampatuan Sr. allegedly ordered his son to stop the convoy in Ampatuan town. The bodies of the victims, including several civilians who were just passing by the Ampatuan town highway, were found buried on a hill in the interior village of Salman.

Andal Sr. and his sons, Andal Jr., then Autonomous Region in Muslim  Mindanao Gov. Zaldy Ampatuan and Shariff Aguak Mayor Anwar Ampatuan, are in jail while facing trial in connection with the carnage.

Mangudadatu, however, said Zahara and Zamzamin are “good Ampatuans” who are working with him in delivering basic services.

The governor admitted to the Inquirer that he does not go to the “Ampatuan towns” for security reasons. “Their allies are still there,” he said.

Mangudadatu cited reports he received that suspects in the massacre were seen freely moving around Datu Unsay town.

But Mangudadatu seemed not surprised, saying a police officer in Maguindanao is still in position and close to the Ampatuans.“There was a time when the police officer was seen using a pickup truck owned by Andal Jr.,” he said.

This same vehicle, he said, was used during the massacre.

He said the Department of the Interior and Local Government has not acted on his request to have the police officer replaced.

Mangudadatu said he relies on the military and the Criminal Investigation and Detection Group (CIDG) in arresting the remaining massacre suspects.

“If these groups (military and CIDG) operate, they can surely catch some of the suspects,” he said.

Rowena Paraan, chairperson of the National Union of Journalists in the Philippines, called on President Benigno Aquino III to make good his campaign promise to help move the case against the Ampatuans faster.

Paraan also said they were not only seeking justice for the victims, “but also to challenge the government to address the problem of warlordism, existence of private armies and political patronage, which resulted in the massacre.”