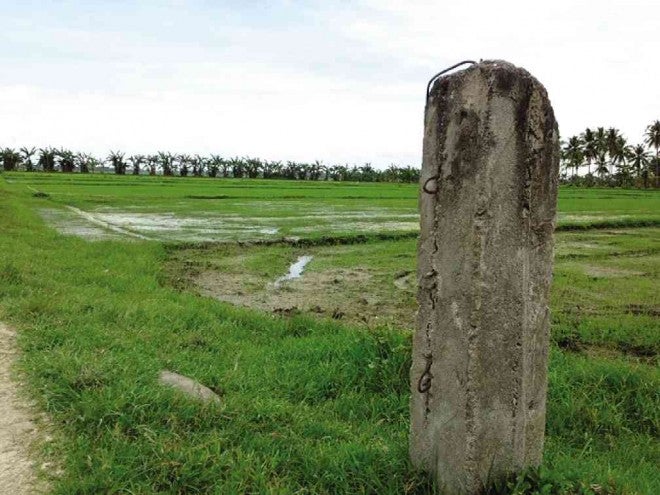 A CONCRETE POST is left of the fence that the Ampatuan clan had erected around farms that the family allegedly forcibly took from residents of Shariff Aguak town. Some residents reportedly joined the Moro rebellion after they failed to get justice. NICO ALCONABA

It, however, took 22 years before Goma could return to the land that his family owns. In 1988, then Maganoy (now Shariff Aguak) Mayor Andal Ampatuan Sr. took the land and claimed it as his.

“Andal’s goons came here, burned our houses and drove us away,” Goma said in an interview in his farm in Barangay Kuloy in Shariff Aguak town in Maguindanao.

There were at least a thousand residents in Kuloy in 1988, when Ampatuan was still mayor.

“Some went to the cities of Cotabato, General Santos and Tacurong,” Goma said.

Goma, who was 30 years old at that time, joined the Moro rebel movement.

“My family was somewhere else while I was in  Liguasan Marsh (a known lair of Moro rebels),” he said.

“We had nothing. We ate whatever we had. Some even went to the extent of selling kangkong just to have money to buy food,” Goma said. The women, he added, resorted to weaving mats.

Remmy Tegoy, the newly elected village chair whose family was also driven out of the land, said the displaced residents had “nothing while Andal had everything.”

“That’s the reason why most of the people here are no-read, no-write. Our parents did not have money for education because the land was taken by Andal,” Tegoy said.

Then the Maguindanao massacre happened on Nov. 23, 2009. At least 58 people, 32 of them media workers, were killed upon orders of Andal Sr. The victims were on their way to Shariff Aguak town to file the certificate of candidacy of Buluan town Vice Mayor Esmael Mangudadatu who was running for governor against Andal’s son and namesake, Andal Jr., when flagged down by armed men in Ampatuan town.

Andal Jr., then the mayor of Datu Unsay town, led the carnage. The bodies, including some who happened to be just passing by, were later found buried in a hillside in the interior village of Salman in Ampatuan town.

Weeks after the massacre, Andal Sr., Andal Jr. and his other son, Zaldy, then the governor of the Autonomous Region in Muslim Mindanao, were arrested for their involvement in the massacre.

With the Ampatuan father and sons in jail, Goma and some residents decided to claim what was theirs.

“They (Ampatuans) had the land fenced with concrete posts and barbed wire,” Goma said.

The concrete posts now serve as makeshift bridges for people to cross irrigation canals that the government constructed in 1998 even if the piece of property was forcibly taken away from its real owners.

In the past two years, residents of Barangay (village) Kuloy have been picking up the pieces of their lost lives.

“But some could not come back because they have no homes to return to,” Tegoy, the village chair, said.

Those who have returned found work in farms.

Tegoy said for each hectare, they harvest at least 70 sacks of palay three times a year.

But Goma and his clan are not certain of the future. “What if they are freed?” a clan member asked, referring to the Ampatuans.

The Ampatuans still hold power in several towns in Maguindanao. The mayor of Shariff Aguak is Zahara Ampatuan, wife of Anwar, son of Andal Sr. Anwar and his son Anwar Jr. are also in jail for their involvement in the massacre.

Tegoy, however, said they do not have a problem with Zahara, who got reelected despite being challenged by “real” members of the Ampatuan family.

Sources said the Ampatuan clan does not consider Zahara an Ampatuan, she being “just a wife.” Zahara, in a separate interview, refused to comment on the issue.

Mangudadatu, in a separate interview, described Zahara as one of the “good Ampatuans.”

Goma, however, said he and the other families who had fallen victim to the Ampatuans could not let their guard down since the farm that they are reclaiming is just 3 kilometers from the Ampatuan mansions in the Shariff Aguak town center.

“They still have people loyal to them. Their militias are still around, hiding,” he said.

This, he said, was the reason the Ampatuans are surviving despite their waning power.

This is the case of Al Kato, a resident of Datu Saudi Ampatuan town, whose family used to own a 10-hectare land in Datu Unsay town.

“They drove us away and took our land,” he said in an interview in Datu Saudi town.

“I cannot go back there and reclaim our land because they are still in power there,” he added.

Datu Unsay’s mayor is Reshal, wife of Andal Jr. Mangudadatu has admitted to the Inquirer that for security reasons he does not go to the towns still being held by the Ampatuans.

“They still have their galamay (tentacles) there,” the provincial governor said.

But residents of Datu Saudi town are proud to say that they are free from the Ampatuans. They, however, are seeking justice for what happened to them.

“They took money, appliances, even the spoons and forks,” he said.

Some residents claimed that while they were in the evacuation centers, Andal would order his men to cut down coconut trees, process these as lumber and sell these to lumberyards in Tacurong City in Sultan Kudarat.

Farm animals like carabaos, goats and ducks were not spared, Tundok added.

“They took away my carabao,” Migsabala Magalunga, 63, said. His case, however, was different—the carabao still had a cart attached to it as the old man and his family were getting ready to evacuate when the militiamen arrived sometime in 2007 and took it.

“The carabao and the cart, including the suitcases and 10 sutras (expensive blankets), ended up in the house of Andal in Shariff Aguak town,” he said.

Residents of Datu Saudi said they have been living in relative peace now that most of the Ampatuan men are in jail while facing trial for their involvement in the massacre.

“The militiamen are gone,” Magalunga said.

“Had it not been for those who died in the massacre, we won’t still get justice for what the Ampatuans did to us,” Goma said.

“For something good to happen, [they] had to die,” he added.