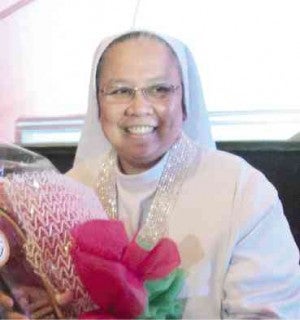 The Professional Regulation Commission (PRC) has recognized a Salesian sister for her dedication and commitment to her profession. Sister Maria Victoria Palomo Sta. Ana, FMA, Laura Vicuña Foundation Inc. executive director, was recently named 2013 outstanding social worker by the PRC in awarding ceremonies held at Manila Hotel. Known for her strong stance against child labor and advocacy of women’s rights, Sta. Ana was lauded for her “selfless dedication to the poor, especially the empowerment of young people.” Aside from her work in the foundation, she has served 30 years as a  registered social worker and 25 years as a Salesian sister. She also sits on the board of the International Network of Consecrated Persons Against Trafficking in Persons (Talitha Kum). According to the PRC, Sta. Ana used her networking skills, coupled with hard work and determination, to improve the services of the foundation, thus enabling it to serve a large number of disadvantaged women and children despite its small size.

A volunteer “tanod” (watchman) was killed after two men barged inside an outpost and shot him before dawn yesterday in Barangay Holy Spirit, Quezon City. Agapito Alorong died due to three gunshot wounds in the head. Case investigator PO2 Rhic Pittong said two men whose faces were covered with towels even slapped Alorong, 48, before they shot him at the barangay outpost on St. Anthony Street at 1:05 a.m. Thursday. Another barangay watchman, Terry Magno, said he was writing something in the logbook when he heard gunshots. He rushed outside to look for the source of the noise and met one of the assailants who told him, “Don’t move or I’ll shoot you.”  Recovered from the crime scene were four 9mm casings and a slug. Julie M. Aurelio