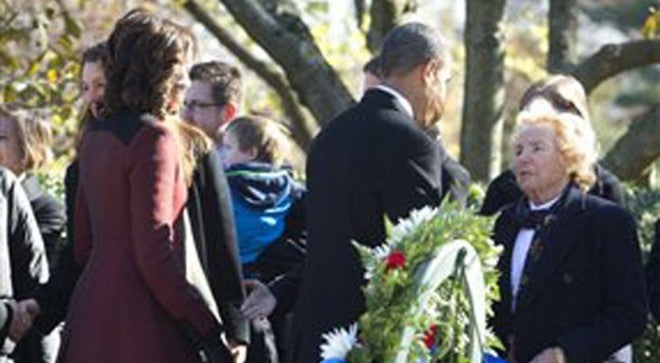 WASHINGTON—President Barack Obama laid a wreath at John F. Kennedy’s gravesite as a nation remembers the terrible day in Dallas a half-century ago Friday when Kennedy was assassinated. Obama also recognized a group of distinguished Americans — including Bill Clinton and Oprah Winfrey — with the Presidential Medal of Freedom, an award created by JFK.

Obama was joined at Arlington National Cemetery on Wednesday by Clinton, and each president held hands with Ethel Kennedy, widow of Robert F. Kennedy, as they climbed a flight of stairs to the burial site on a steep hillside overlooking the nation’s capital.

First lady Michelle Obama and former Secretary of State Hillary Rodham Clinton helped their husbands place a large wreath of white flowers in front of the roped-off gravesite of America’s 35th president, which is marked by an ever-burning flame.

Both couples placed their hands over their hearts as taps sounded near a U.S. flag at half-staff before greeting Kennedy relatives, including some who arrived in Obama’s motorcade, before Friday’s 50th anniversary of the assassination.

The day of tributes began at the White House, where Obama awarded the Presidential Medal of Freedom to 16 living and deceased Americans for their contributions in fields ranging from sports and entertainment to science and public service.

“These are the men and women who in their extraordinary lives remind us all of the beauty of the human spirit, the values that define us as Americans, the potential that lives inside of all of us,” Obama said.

Hillary Rodham Clinton, daughter Chelsea Clinton and film director Steven Spielberg were among scores of people seated in the White House East Room for the ceremony, which Obama said is “one of my favorite events every year.”

Kennedy established the modern version of the medal but was killed by Lee Harvey Oswald in Dallas on Nov. 22, 1963, weeks before he was to honor the inaugural group of recipients. Hundreds of notable figures since have received the honor.

Obama continued to lionize the slain president Wednesday evening at a dinner honoring the medal’s recipients. At the Smithsonian’s National Museum of American History, Obama was introduced by Kennedy’s grandson, Jack Schlossberg, whose mother, Caroline Kennedy, is Obama’s newly confirmed ambassador to Japan.

“He reminded us that everyone has the capacity to explore, to imagine and to give back to our great nation no matter the path we choose,” the younger Kennedy said of his grandfather.

Obama said Kennedy stays in America’s imagination not because he was assassinated, but because he embodied the character of the people he led. He said Kennedy was defiant in the face of impossible odds and determined to make the world anew.

“This is a legacy of a man who could have retreated to a life of luxury and ease, but he chose to live a life in the arena,” Obama said. “Sailing sometimes against the wind, sometimes with it.”

At the awards ceremony Wednesday morning, Obama said a few words about each recipient. Of Clinton, he said the Arkansas Democrat’s presidency marked just the start of his work to make the world a better place, crediting his post-presidency humanitarian efforts as helping to save or improve the lives of millions worldwide.

“I’m grateful, Bill, as well, for the advice and counsel that you’ve offered me, on and off the golf course,” Obama said to chuckles.

As a teenager, Bill Clinton shook hands with Kennedy in the Rose Garden the summer before the assassination when he and other high school students in the Boys Nation program came to Washington.

Obama said the late Sally Ride, the first American woman in space, didn’t just break the stratospheric glass ceiling. “She blasted right through it,” becoming a role model for young girls, he said.

“You can’t be what you can’t see,” Obama said. “Today our daughters, including Malia and Sasha, can set their sights a little bit higher because Sally Ride showed them the way.”

Receiving the award for Ride, who died last year, was Tam O’Shaughnessy, who was introduced as Ride’s life partner.

The president made a point of highlighting those who had overcome additional obstacles and stigmatization because they are gay, black, female or Asian. He noted that early in her career, Oprah Winfrey’s bosses suggested she change her name to something more relatable.

“It turned out, surprisingly, that people could relate to Oprah just fine,” Obama said.

On Friday’s assassination anniversary, Obama plans to meet privately at the White House with leaders and volunteers from the Peace Corps program, also established by Kennedy.

The Clintons’ presence at Kennedy’s gravesite was sure to spark speculation about whether Obama has a favorite in the 2016 race to succeed him.

Every move by the former secretary of state is being scrutinized for signs of whether she’ll run. Vice President Joe Biden, another potential candidate, attended only the White House ceremony.