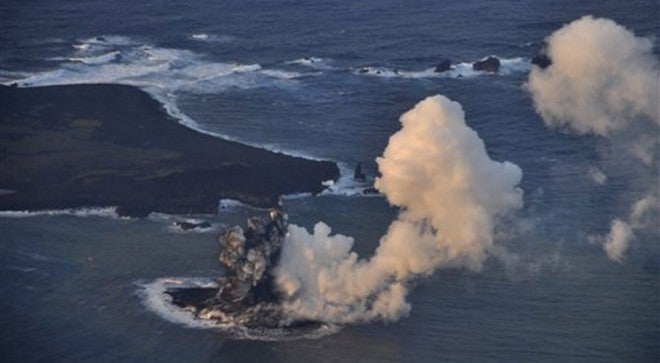 In this Wednesday, Nov. 20, 2013 photo released by Japan Coast Guard, smoke billows from a new island off the coast of Nishinoshima, seen left above, a small, uninhabited island in the Ogasawara chain, far south of Tokyo. The Japan Coast Guard and earthquake experts said a volcanic eruption has raised the new island in the seas to the far south of Tokyo. AP

TOKYO, Japan—The Japanese coast guard and earthquake experts say a volcanic eruption has raised a new island in the seas to the far south of Tokyo.

Advisories from the coast guard and the Japan Meteorological Agency said the islet is about 200 meters (660 feet) in diameter. It is just off the coast of Nishinoshima, a small, uninhabited island in the Ogasawara chain, which is also known as the Bonin Islands.

The approximately 30 islands are 1,000 kilometers (620 miles) south of Tokyo and along with the rest of Japan are part of the seismically active Pacific “Ring of Fire.”

The coast guard issued an advisory warning of heavy black smoke from the eruption. Television footage showed heavy smoke and waters roiling over the crater.