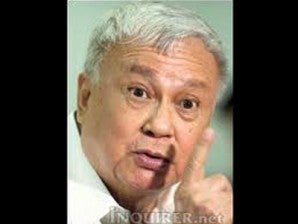 Senator Joker Arroyo on Sunday said “evil geniuses” drafted a special provision in the proposed 2012 budget that would allow the Office of the President to take over the savings of judicial, legislative and constitutional bodies.

It would be tantamount to a new pork barrel if the President would have discretion over the release of up to P101 billion resulting from these savings, the senator said.

Arroyo, a human rights lawyer during the Marcos dictatorship, said this practice was last observed during the martial law years, which the 1987 Constitution scrapped.

He doubted whether President Aquino knew about this. “But whoever thought of it has a devious mind,” the senator said.

Arroyo said the P101-billion projected savings, to be called the Miscellaneous Personnel Benefit Fund (MPBF), came from computations made by the House committee on appropriations.

Senator Franklin Drilon, chairman of the Senate finance committee, said the fiscal autonomy guaranteed by law was not compromised by the MPBF provision.

He said funds for filled vacancies were “automatically released,” contrary to Arroyo’s fears.

Drilon said the budget department’s permission was not required before funding for salaries was released. “The offices concerned only need to appoint and the appropriation for salaries would be released,” he said.

He said the MPBF provision was introduced to prevent the conversion of savings into bonuses that unscrupulous government officials award themselves.

“Some agencies abuse their savings. For example, if P100 million is allotted for the salaries of 100 workers, some would hire only 90 people, declare the 10 vacancies as unfilled and convert the savings from the savings obtained into bonuses,” he said.

Drilon said the release of public funds for salaries would not need the President’s approval. “Once the (Judicial and Bar Council) appoints a judge, the salary is automatically released,” he said.

Arroyo noted that the Department of Budget and Management (DBM) included a provision stating that if the vacancies were filled, the offices concerned would have to request the department to release the appropriation for the salaries “subject to the approval of the Office of the President.”

“What deviltry is this?” the senator said in Filipino on the phone.

“These are symptoms of fascism, the control by one office of the budget. This is not a good beginning. All the four Presidents after Edsa I respected the rights of Congress and the Supreme Court to handle their savings. Now these rights would be set aside by the evil geniuses who drafted this new budget,” he said.

Arroyo said the savings would be miniscule in the context of the entire P1.8-trillion proposed budget for 2012.  Hence, the President should leave the offices concerned to deal with these funds.

“Take, for instance, the judiciary. The executive branch reduced the appropriation by P1.86 billion that represents the budget for unfilled positions of the judiciary for the entire country. It was removed from judiciary’s budget and lumped into the so-called MPBF,” he said.

Arroyo noted that the amount was not even one-tenth of one percent of the entire national budget. “So why is it being targeted?” he asked.

Arroyo said the funds intended for the judiciary would be controlled and released by the Executive. “That goes against the constitutional guarantee of the authority and independence of our judicial system,” he said.

“What if the Supreme Court should appoint a Regional Trial Court or municipal judge? Or a clerk of court? The special provision means the tribunal has to make a request with the executive branch through the DBM for the salaries of the appointee. That means the judiciary would be begging for funds within its office,” the senator said.

Drilon could not resist taking a jab at Arroyo, once his predecessor as executive secretary in the first Aquino administration.

“There were also a lot of geniuses in the time of President Gloria Arroyo, but we did not hear anything from Joker,” said Drilon, a staunch supporter of Mr. Aquino.

In the House of Representatives, Majority Leader Neptali Gonzales II concurred with the stand of Arroyo that the creation of an MPBF under Budget Secretary Florencio Abad Jr.’s full control could raise “constitutional issues on fiscal autonomy.”

But Gonzales expressed confidence that the 285-strong lower House would go over the proposed budget for 2012 with a fine-toothed comb.

Isabela Representative Georgidi Aggabao said the proposal for the MPBF to be under Abad’s control could prove to be beneficial.

“This will put a brake on the penchant of department heads to declare allocations for unfilled positions as savings and then using such savings as pork barrel that they may use any which way they want. I think this will be a strong means to tighten control over budgetary allocations,” Aggabao said.  With a report from Gil C. Cabacungan Jr.