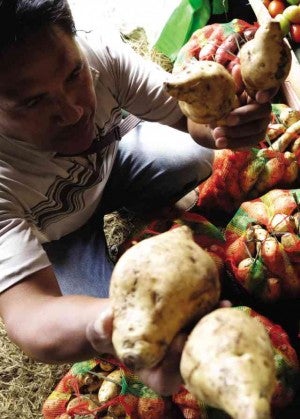 SURVIVAL CROP “Camote” (sweet potato) and other root crops are the best crops to nurture in areas hit by typhoons and other calamities because these would feed and sustain survivors. EV ESPIRITU

The lowly camote (sweet potato), also considered the poor man’s staple, finds its value as survivor’s crop in these abnormal times of super typhoons and other disasters.

“One lesson we learned from Typhoon ‘Pablo’ was the need for immediate food, such as camote, cassava and other root crops, particularly when road access to towns is cut off,” said Allan Delideli, head of Silangang Dapit sa Sidlakang Mindanao (Sildap), a nongovernment organization offering alternative education and development approaches to indigenous peoples in Mindanao.

Delideli, who was in Baguio City last week for a meeting of nongovernment development workers on disaster-preparedness, was referring to the devastation wrought by Pablo (international name: Bopha), with winds of 280 kilometer per hour, which hit Mindanao on Dec. 3 last year. The typhoon left 1,146 dead, 834 missing and more than $1.04 billion in damage.

Immediately after Pablo struck, Sildap embarked on a disaster-preparedness program, which, Delideli said, would help indigenous communities survive the onslaught of extreme weather disturbances and earthquakes.

Part of this Sildap program is collecting and planting all varieties of camote, cassava, gabi (yam) and other root crops. “And we found out that there is such a variety of gabi, which could be eaten raw,” said Manggob Masinaring, also of Sildap.

Sildap took the task of helping prepare indigenous peoples in Mindanao seriously, particularly after Pablo battered Compostela Valley and its neighboring provinces where Mandaya, Mansaka and other indigenous groups were caught unprepared by Pablo, the strongest typhoon that hit the area last year.

Having experienced the chaos and difficulty in accessing relief goods in town centers, Sildap embarked on a campaign urging its indigenous community partners to consider planting and consuming root crops. It encouraged households to cultivate root crops in some portions of their backyard and other idle spaces.

Like other indigenous communities, the Mansaka, Mandaya, T’boli, Manobo and other Mindanao tribal folk had maintained root crops in their upland swidden farms. Unfortunately, many of them had given up root crops after swathes of their lands were converted to mono-crop banana and pineapple plantations, Sildap officials said.

Thus, part of Sildap’s disaster-preparedness program is reviving traditional farming, which is based on diverse and mixed crops.

Until the 1980s, most villages in the upland town of Kibungan in Benguet province had practiced traditional farming where they both cultivated rice in paddy fields and various root crops, legumes and beans in upland farms.

For a long time, residents of Kibungan had survived the worst typhoons, such as “Trining” in 1967, which had blown away roofs of school buildings and cut off the only road to the town for months.

When the rain arrived in May, Kibungan farmers would start planting camote, gabi, peanuts, other root crops, corn and different varieties of bananas. So by August, when strong typhoons were expected, they could start harvesting these crops.

Rice could be planted twice in paddy fields with a year-round irrigation while the rest, once during the rainy season.

Kibungan folk in those days hardly had surplus to sell. But during typhoons, they had boiled camote, peanuts, corn and banana to sustain them.

But this setup changed starting in the 1990s, when many farmers converted to cultivating a cash crop—sayote. Former swidden farms and some rice fields, including secondary forests, had been converted to hectares of sayote farms.

Kibungan is considered the top sayote producer in the Cordillera region. Around 20 tons of sayote is harvested daily and is delivered mainly to the vegetable trading post in the capital town of La Trinidad.

The economic impact of cultivating sayote cannot be discounted. Many farmers have given up their grass-thatched houses and replaced these with corrugated iron-roofed structures. Some even bought their own delivery trucks.

As is the case in a cash economy, most consumer items now, including rice and other food items, are bought in Baguio City, 64 km south of Kibungan.

But during typhoons when the road is cut off, many Kibungan folk worry about where to buy their rice supply. When Typhoon “Pepeng” hit in October 2009, when roads and bridges were damaged, for example, town and social welfare officials had to seek outside help for the transport of commercial rice.

The good news was that the rice allotment that town officials received was rationed in an organized manner so each family was able to buy at least a maximum of 15 kg.

After their experience with Pepeng, some Kibungan folk have also opted to at least cultivate some “survivor crops,” camote and gabi, apart from sayote.