Aquino mulls use of Malampaya fund for power in Visayas 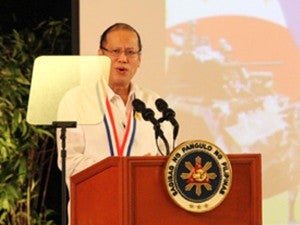 President Aquino wants to tap the Malampaya Fund to finance the restoration of power in the Visayas. INQUIRER.net Photo

TACLOBAN CITY, Leyte, Philippines—President Aquino has ordered his legal team to study whether he could tap the Malampaya Fund to finance the restoration of power in the Visayas.

The President will be having a meeting on Thursday to look into the budgetary impact of rehabilitating areas hit hard by Supertyphoon “Yolanda” (international name: “Haiyan”).

“We don’t have the bill yet for power restoration. One issue is (160) transmission towers of the NGCP (National Grid Corporation of the Philippines) had been damaged. Now the question is how do you pay for that,” he said in an ambush interview here.

“One avenue is NGCP will fund it, but will ask ERC (Energy Regulator Commission) for adjustment of rate to recover. If that happens, then people who are recovering will be asked to pay higher for power bills, which we don’t want to happen,” he said.

He then tasked his legal counsel, Alfredo Benjamin Caguiao, to study whether the Malampaya Fund, which stood at P130 billion as of the latest estimate, “would be the better avenue to restore this state asset.”

“The transmission lines are in effect just leased to the concessionaires, and they are state assets. The initial estimate is P1 billion, and if we spend it from Malampaya … (it would be) negligible, considering the amount of Malampaya,” he said.

This would also “spare” the people recovering from the typoon from having to pay more for their electricity, he said.

On relief efforts, food packs for typhoon victims in Region 8 have been costing P70-75 million a day, he said.

“In the consideration (is) to feed the people, take care of the injured, ensure their health, and make sure they are sheltered. You have to put a priority (on these aspects),” he said.

For shelter, initial figure is P380,000 for each weather-resistant house as part of socialized housing component of the recovery and rehabilitation process.

“Fortunately, for infrastructure, very few of our roads and bridges were damaged. If at all, (these are) the approaches to the bridges,” he said.

He didn’t have the figures yet for damage and losses in the agriculture sector.

“There is a demand for certified seeds to be able to replant for the December cropping season (for rice),” he said.

For coconut, the government has a program to assist the replanting of coconuts, “but you are tasked to intercrop to increase the income for all farmers involved,” according to the President.

“So hopefully that will be implemented in these areas using the coconut trees that had been uprooted,” he said.

On transportation, he said the government has been programmed to improve Tacloban airport.

“What came to my attention in past days is at least half of this peninsula is prone to flooding, especially with storm surges, so that is being studied as to whether this is a suitable area to build an airport,” he said.