No phone signal? No problem, military resorts to couriers 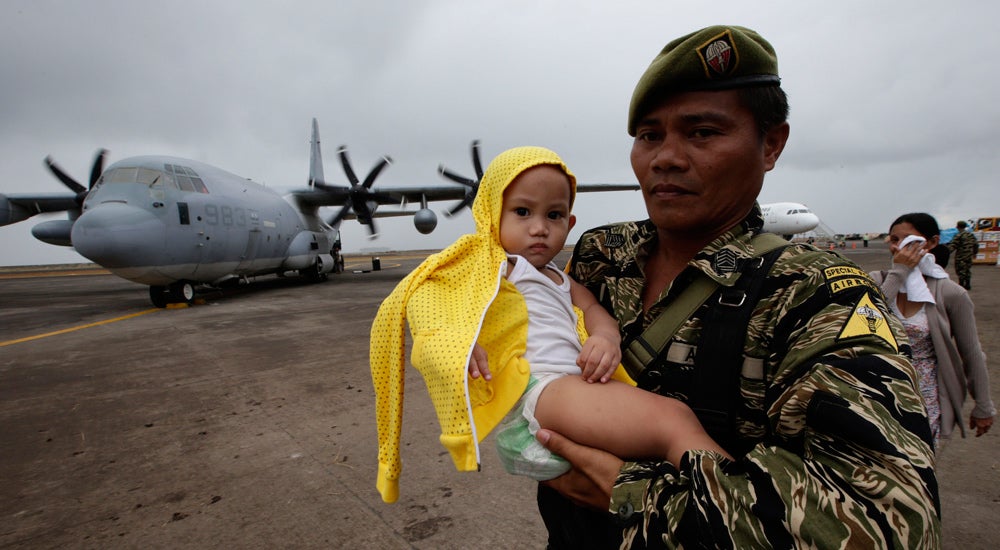 A soldier carries a baby to board a US C-130 military transport plane (background) which is on a mercy flight Sunday Nov. 17, 2013 at the damaged Tacloban airport, Tacloban City. With many communication facilities still down in Supertyphoon “Yolanda”-devastated areas, the military has resorted to the age-old system of couriers to reach local officials. AP PHOTO/BULLIT MARQUEZ

MANILA, Philippines—With many communication facilities still down in Eastern Samar, the military has resorted to the age-old system of couriers to reach local officials.

The Army’s 8th Infantry Division (8ID), whose area of responsibility is Eastern Visayas, has been getting reports from and relaying updates to local officials in cutoff municipalities through soldiers tasked with acting as couriers.

“The couriers go on motorcycle or on foot if there is really no other means of transportation, or by boat to the small islands,” said Capt. Amado Gutierrez, 8ID spokesperson.

“Since communication is still out in all towns of Eastern Samar, the courier system is our means of communication,” he added.

Gutierrez, who was reached by phone from the Army’s 8ID headquarters in Catbalogan City, which was not heavily damaged by Supertyphoon “Yolanda,” said the military radio system was not readily accessible for local chief executives.

So on Monday, 10 days after Yolanda struck, the government requested the United Nations Office for the Coordination of Humanitarian Affairs (Ocha) to give satellite phones to all local chief executives of Eastern Samar.

“It was agreed this morning that (Interior) Secretary Mar Roxas will relay to the Ocha the request to give Samar satellite phones to facilitate our communication with local chief executives, and the Ocha said they will purchase them,” Gutierrez said.

Eastern Samar is composed of 22 municipalities and one city, Borongan.