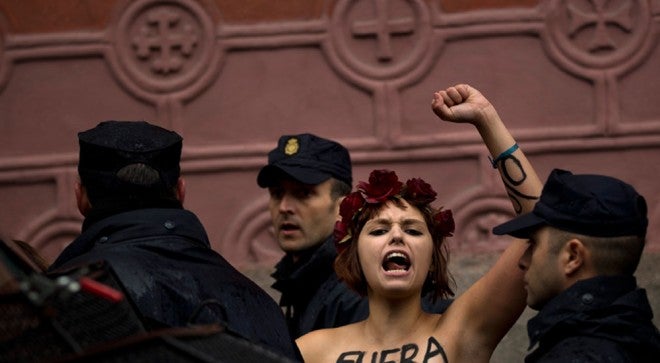 MADRID – An anti-abortion rally in Spain by Christian groups has been disrupted by a five topless women from the feminist group Femen chanting “Abortion is sacred.”

Rally participants tried to grab hold of the topless women and hit some of them with red spray paint before police intervened to stop the melee in downtown Madrid.

It was one of 46 such rallies planned in Spanish cities and towns on Sunday in support of a possible government proposal to add restrictions to a law that allows abortion until the 14th week of pregnancy.

Read Next
Dangerous weather, tornadoes tear up US Midwest
EDITORS' PICK
Acer starts the year off strong with the Aspire Vero National Geographic Edition
The best of bayside and city living at SMDC’s Sail Residences
EDITORIAL: Protecting the polls’ integrity
COVID-19 virus spread slowing down in Metro Manila, says OCTA Research
Over 3 Million worth of prizes to be won at Smart Padala’s SENDali Manalo Promo!
Comelec junks petition to scrap Bongbong Marcos COC
MOST READ
In Batanes, octogenarian dies of COVID-19
Drug lord Espinosa tried to escape through air vent at detention facility – NBI
When to get boosters after positive COVID test
Marcos Jr. visits Cebu, stands as ‘ninong’ to mayor’s son
Don't miss out on the latest news and information.