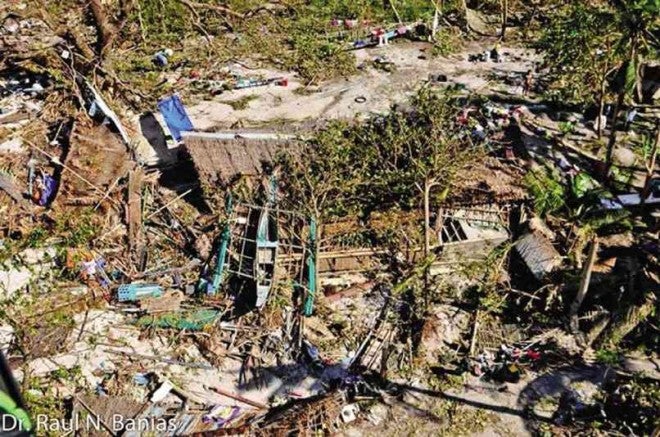 ILOILO CITY—At first, Jerry Bionat found incredible the official report about the number of houses destroyed and damaged by Supertyphoon “Yolanda” in Iloilo province. “I thought the figures were interchanged,” said the executive officer of the Provincial Disaster Risk Reduction and Management Office.

It was the first time in his 22 years of dealing with disasters that the “destroyed” outnumbered the “damaged.”

Officials still do not have a rough estimate of the cost of rebuilding the houses and other structures, but it is clear that typhoon survivors in the provinces of Iloilo, Antique, Aklan and Capiz will need all the help they can get to start picking up the pieces and move on with their lives.

Economic planners and local officials say that while relief operations are the main concern, resources and support should also focus on recovering from the social and economic damage.

Yolanda pounded the hardest the northern towns of Iloilo and Antique, Capiz and Aklan on Panay Island. It devastated the island villages of coastal municipalities, which are the main suppliers of fish and other seafood.

“We are expecting a significant impact on fish production that will affect the supply in Panay and those exported to other provinces and countries,” said Raul Anlocotan, assistant director of the National Economic and Development Authority (Neda) in Western Visayas.

Capiz, dubbed the country’s “seafood capital,” reeled as many of its fishing grounds were badly hit.

Anlocotan said it would take time for thousands of fishermen to recover from lost or crippled boats, especially the towns in northern Iloilo, which account for 80 percent of the province’s total fish supply. Northern Iloilo is composed of the towns of Ajuy, Balasan, Barotac Viejo, Batad, Carles, Concepcion, Estancia, Lemery, San Dionisio, San Rafael and Sara.

Iloilo fish production reached 90,000 metric tons last year, according to provincial agriculturist Ildefonso Toledo. The figure is expected to plummet after the typhoon.

Toledo said the drop in fish supply could last at least six months depending on the assistance given to the fishermen. In the capital Iloilo City, prices of fish have already gone up.

Gov. Arthur Defensor said rebuilding the livelihood of fishermen and other survivors were beyond the capacity of the provincial government. Iloilo’s resources are not enough to respond to the needs of all his constituents, considering the extent of the devastation in the northern areas, he explained.

Defensor and other officials are asking the national government, private organizations and individuals for help in extending aid to the survivors.

Sonny Ciriaco, a barangay councilor of Mangalabang Island in Concepcion, said the fishermen would need boats more than houses. They do not have any income if they cannot fish, he said.

Seventy percent of the 49,800 residents are dependent on fishing. However, Mayor Milliard Villanueva said the municipality could not afford to buy the fishing boats.

Anlocotan of the Neda regional office said Yolanda would also severely affect tourism in northern Iloilo, which is being developed as a major tourist destination.

Concepcion, Carles and other towns boast of white sand beaches and pristine islands, but many resorts there were destroyed or badly damaged by the supertyphoon.

Loss of livelihood and damage to property will have a multiplier effect on the economy, resulting in a decline in the purchasing power of survivors.

“We can expect a drop in purchases, especially of nonessential goods,” Anlocotan told the Inquirer.

There are as yet no accurate estimates of the destruction brought by Yolanda, but the disaster would certainly slow down the economic performance of Western Visayas.

The region’s economic growth was the Philippines’ fastest last year, registering a 7.5-percent increase in gross regional domestic product (GRDP) compared with 6.2-percent growth in 2011. The GRDP is the sum of goods and services produced in a region and is used as a measure of economic performance.

The GRDP was projected to grow by 6.2 percent in 2014, but then Yolanda came.

Read Next
Woman from Capiz island suffers trauma after husband dies for her
EDITORS' PICK
Pharmally scandal: When middlemen profit even during a pandemic
The crisis within: Suicides rise as COVID takes its toll on lives, livelihood
DOTr to defend proposal to increase passenger capacity in public transport
Legarda emphasizes role of ICC/IPs in nation building this IP month
USAID Opportunity 2.0 calls for applicants for grants for out-of-school youth engagement
Work-From-Home is here to stay and requires reliable logistics
MOST READ
Robredo on vote buying: That might be taxpayer’s money so accept it, but vote based on conscience
Bongbong says PH should modernize infrastructure to become Asia’s next logistics hub
Karen Davila’s son survives second full-blown seizure, now well
Isko to critics after remarks vs Robredo: I’m sorry, this isn’t about Mr. Congeniality
Don't miss out on the latest news and information.