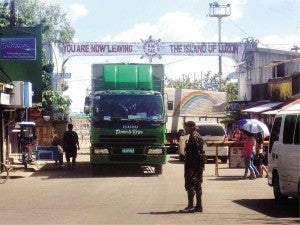 A cargo truck, one of hundreds of vehicles bound for Samar and Leyte provinces, prepares to board a ferry in Matnog, Sorsogon province, for the mercy trip to the Visayas on Friday. PHOTO FROM PNP INFORMATION OFFICE-BICOL

TACLOBAN CITY, Leyte, Philippines – Six villages in the western coastline cut off from the rest of Tacloban were finally reached by Philippine Navy personnel in rubber boats, bringing much needed water and food packs to some 3,000 isolated residents, a week after “supertyphoon Yolanda” (international name Haiyan) wrecked the city.

The villages of 65, 66, 67, 68, 69 and 70 have become unreachable when a passenger vessel, M/V Eva Jocelyn, that was docked offshore was displaced from its mooring at the height of the storm surge brought on by the typhoon and slammed into houses before landing in the middle of the road leading to the six villages located on the western tip of the city.

These villages were beyond help’s reach until Navy and Air Force personnel decided to bring them relief goods via rubber boats on Saturday morning, said Lt. Ferdinand De Lima, head of the Armed Forces of the Philippines’ Search and Retrieval Team for Yolanda victims.

Authorities only learned of the plight of the six villages after Marieta Gaspay, chairwoman of Barangay (village) 67, came asking for help for her constituents from Interior Secretary Mar Roxas on Friday after a week of waiting for assistance from the government.

“Please make us a priority. News may tell you that all roads in Tacloban are accessible now but that’s not true. We are the most isolated villages now and we badly need help,” she said.

Gaspay also sought help from the Team Albay-Office of Civil Defense 5 (OCD) 5, the disaster response team from Bicol region, when her desperation for assistance brought her to the city proper.

According to Marieta, the six villages were populated by about 3,000 people but she believed many of her constituents and residents from neighboring villages who went missing since Yolanda’s onslought on Nov. 8 might be dead and buried under the rubble and debris on the roads there.

“We feel trapped,” she said.

Reynato Sepago, village councilman of Barangay 68, said that some 400 residents of the six villages were still missing until Sunday.

“Even the beautiful big houses here were crushed by that ship. We never thought this could happen,” he said.

Marcos Buclatan, also a village councilman or Barangay 68, blamed their plight to the lack of foresight on the part of local government officials.

He said the city government should have directed the owners and operators of the ships to dock the vessels on the far side of the coast where they could not be moved inland by the waves.

On Saturday, search and retrieval teams and road clearing teams from the Department of Public Works and Highways (DPWH) immediately moved to clear the debris blocking the road leading to the isolated villages but were able to dig up the body of a yet to be identified little girl under a pile of splinters of wood.

Dina Bohol, 28, one of the first few residents of Barangay 70 reached by the Navy and Air Force rescuers, said residents in the trapped villages have started burying the dead in an effort to slowly clean the place.

Gaspay appealed to government agencies and non-government organizations to continue sending more relief goods to the residents of the isolated villages.

Elsehwere in the city, clean and potable water remained high on the list of demands for the typhoon victims even as Local Water Utilities Administration (LWUA) has announced the full restoration of potable water supply in Tacloban.

Matthew Cochrane, spokesperson of the United Nation’s Office for the Coordination of Humanitarian Affairs (UN OCHA) now supervising his agency’s relief efforts in Tacloban, admitted it was quite a challenge to bring and distribute relief goods to residents, including potable water, during the first week after Yolanda hit the Philippines due to so much damage inflicted upon vital infrastructures like roads and airports.

According to an update report by UN OCHA as of November 15, only 150,000 people had access to clean drinking water even after 28,000 water connections were restored in eight areas in Tacloban and neighboring areas.

The local government of Albay with its partner organizations, dubbed Team Albay, also brought to Tacloban City its own water filtration facility in order to help solve the need for clean water among residents here.

The water sanitation machine (WATSAN) siphoned water from a fire hydrant in Barangay Caibaan then subjected it to 12 stages of filtration to make it clean enough for drinking, said Romulo Buban of Team Albay.

Every night, Buban said the facility filled a water lorry with 12,000 liters of water, which were then distributed to nine evacuation centers in Tacloban.

Joval Galarido, another city resident, welcomed the news of the restoration of the city’s water supply, saying having a steady source of potable water would ease the burden of the thousands who still have to cope with the loss of family members, homes and properties.

Meanwhile, netizens from all over the Philippines were still campaigning via social networks for the inclusion of bottled water in family food packs to be distributed in storm-ravaged areas.

Soliman, now based in Tacloban to oversee government’s relief operations in Eastern Visayas, said the bulk of food relief packs transported to Samar by the US Airforce would be distributed to 30 out 40 towns on Samar Island devastated by Yolanda.

As of Nov. 16, the Department of Social Welfare and Development has listed 58,823 affected families in Tacloban City; 166,138 families in the rest of Leyte; and 48,300 families in Eastern Samar as having been displaced by supertyphoon Yolanda.

(With a report from Jani Arnaiz, Inquirer Visayas)

Read Next
Storm victims in Capiz attend holy Mass, asked not to lose hope
EDITORS' PICK
Gear up and get ready to play with Yamaha Mio Gear
If elected VP, Sara Duterte will push for mandatory military service for all Filipinos
Over 3 Million worth of prizes to be won at Smart Padala’s SENDali Manalo Promo!
Acer starts the year off strong with the Aspire Vero National Geographic Edition
Senate bill seeks to penalize employers requiring employees to work during rest hours
Marcos-era elections: Not what his son signed up for
MOST READ
Vice mayor slams Vico Sotto for turning Pasig into a ‘puro palabas’ city
Jose Manalo’s son Benj pays tribute to late mother: ‘You’re a testimony of God’s love’
‘Sampal sa gobyerno:’ Drilon wants unvaxxed PAO chief barred from working
Bongbong-Sara tandem names 7 candidates in initial senatorial slate
Don't miss out on the latest news and information.