The hero of my tale 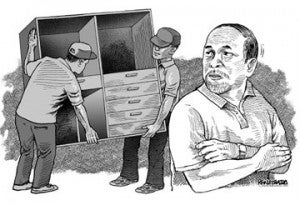 Recently, the wife and I went to a store to buy a cabinet. We used my sister’s card for the purpose. At the entrance, the young man swiped the card through an electronic reader. When my sister’s address appeared on the monitor, he asked us if we still resided in the place, or if we had moved. Ever the truthful one, the wife hemmed and hawed, but I, not wanting to complicate matters, announced that we had maintained the same residence.

Afterwards, as we looked for the cabinet, I found myself regretting having told a lie, although expediency, not malice, had prompted it.

Of course, I strive to be free of deceit. I endeavor to be truthful and sincere. But I do not always succeed. Various considerations, not the least of which is self-interest, mold my assertions and answers. Times there are when I wonder if I can be completely honest at any time at all.

My work as judge compels me daily to confront the question of honesty. I listen to witnesses who each swears to the truthfulness of his or her assertions, and yet, despite the oath, I must ascertain for myself whether or not the witness is telling a lie. In one case, after a determined protestation of his innocence, which called for a full-blown hearing, the accused suddenly broke down and confessed his guilt. Truth had won the day.

As I sit listening to the witness, I cannot help wishing that I could see his mind and heart. That would simplify matters. But I would still have to let him or her speak, so that I would know if his or her words match the truth, and I would have a better measurement in mixing compassion and justice.

As I look at the witness, a child, who might have been brought to the courtroom to be with its father who now sits in the dock, stares at me. I remember what someone said, that God looks at us through the eyes of a child, and it dawns on me that, even as I listen to the witness, God looks and listens to me, too. We all must be judged at the bar of truth. We all must choose whether or not to belong to the kingdom of truth.

Christ told Pilate – by way of reply to the latter’s comment, “You are a king, then!” –”You are right in saying I am a king. In fact, for this reason I was born, and for this I came into the world, to testify to the truth. Everyone on the side of truth listens to me.”

To adhere to the truth is to pray, because in prayer I stand before the God who knows and sees everything, and so I have no choice but to tell the truth and to be honest. And life lived in the truth – every activity devoted to serving the truth – is prayer. This was why purchasing the cabinet led to sadness, because it was marred by a lie.

Truth and prayer form a palindrome.

To pray, or to tell the truth – they are one and the same – is to affirm the reality of God.

It was no accident that St. Anselm formulated his famous proof of God’s existence in the form of a prayer. It came to him after he entered the cell of his mind, shut the door and spoke to God with his heart, “I seek your face, your face, Lord, I seek.”

And then he proceeded, I do want to understand in some small measure your truth, which my heart believes in and loved.

This was the same declaration that Leo Tolstoy made at the end of Sevastopol in May: “The hero of my tale – whom I love with all the power of my soul, whom I have tried to portray in all his beauty, who has been, is, and will be beautiful – is Truth.”