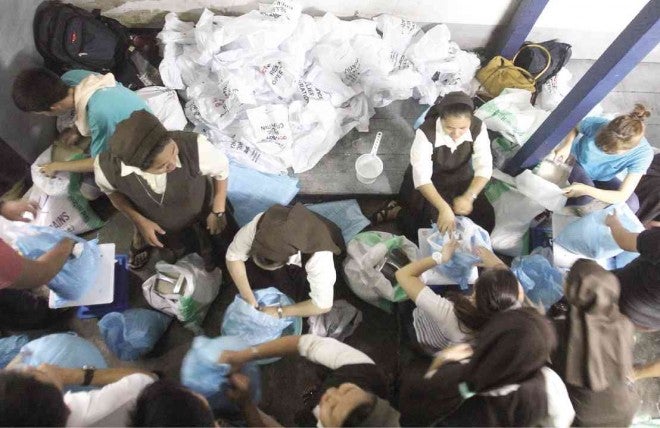 CARMELITE sisters and other religious groups join the army of volunteers packing relief goods at a processing center set up on Edsa, Quezon City, by the United Council of Churches of the Philippines for the victims of Supertyphoon “Yolanda.” JOAN BONDOC

Local governments in Metro Manila stepped up relief efforts Friday for typhoon-ravaged areas in the Visayas region, sending out aid teams, vehicles and heavy cargo while opening more donation centers to produce what one mayor called “the multiplier effect of the bayanihan spirit.”

Taguig City launched its “Bayanihan Ro-Ro Mission,” Pasay City dispatched a group of rescuers, Parañaque City drew from its own calamity fund and kicked off a relief campaign, while Makati City rolled out a fleet of six trucks carrying relief goods.

Around 15 City Hall employees were also deployed to oversee the delivery of the relief goods, in addition to 10 workers handling heavy equipment who were sent to the Visayas region on Thursday, according to the mayor’s office.

For five days, the Ro-Ro vessel, which can carry 300 tons of cargo, would go to Taguig’s “adopted” towns, namely Guiuan, Mercedes, Quinapondan, Salcedo and Gen. MacArthur in Eastern Samar province, and also parts of Leyte. The craft will also help evacuees from Samar who wish to go to Cebu or Batangas.

“We are counting on the multiplier effect of the bayanihan spirit in all of us,” Mayor Cayetano said.

In Pasay, Mayor Antonino Calixto said a team was on its way to Tacloban City on Friday to help in search and recovery operations, relief efforts and medical missions.

Calixto earlier requested the release of P2 million from city coffers for the relief effort. City hall offices were also tapped to serve as donation centers.

NO ACT of kindness, no matter how small, is ever wasted at a relief collection center in UP Diliman, Quezon City. JOAN BONDOC

Parañaque Mayor Edwin Olivarez launched a relief campaign dubbed “Lingap Parañaque” and opened a drop-off point on the ground floor of City Hall, which received a P100,000 donation from Olivarez himself.

“I appeal to all my fellow Parañaqueños to join us in extending a helping hand to our countrymen in the typhoon-affected areas. Any help, however small, will be greatly appreciated by those who have lost nearly everything,” Olivarez said.

On Friday, the Parañaque council also authorized the release of an initial P2 million from the city’s calamity funds for its two “adopted” towns in Eastern Samar: Balangiga and Maydolong.

A 30-member relief and recovery team would be sent to Eastern Samar over the weekend, Olivarez added.

The goods would be distributed in various Leyte towns while the trucks would remain in Tacloban for the use of the local government, said Mayor Jejomar Erwin Binay Jr., son of the Vice President.

Earlier, the Makati City council approved a P50-million aid for local government units in the Visayas.

Volunteers and donors who wish to help Makati-led relief operations are encouraged to go to the Barangay Poblacion covered court on J. P. Rizal Street, near the city museum.