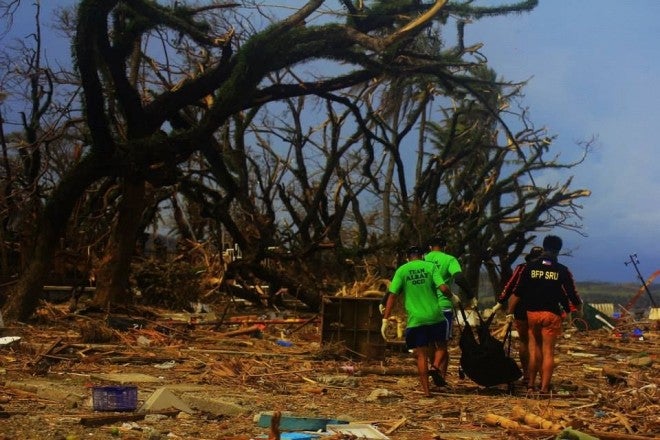 For three consecutive days, TEAM ALBAY and Office of Civil Defense Bicol, is the only group that conducts search and retrieval operation for the victim of Supertyphoon “Yolanda.” MARK ALVIC ESPLANA/INQUIRER SOUTHERN LUZON

DAVAO CITY, Philippines – The leader of a farmers and irrigators’ coalition Sinag called on the government to donate all the smuggled rice to the Yolanda survivors amid reports that over 200,000 cavans of hot rice have again reached the Davao port.

Rosendo So, chair of the Abono partylist and president of the group Samahang Industriya ng Agrikultura (Sinag), said government should directly donate and distribute the seized “hot” rice to Yolanda survivors instead of auctioning it.

“If they auction it, these smugglers might just buy the rice back,” he said in a statement sent to the Philippine Daily Inquirer.

“These should be given instead to the survivors of the typhoon,” he added as he urged the government to step up its campaign against the entry of smuggled rice.

He said some 200,000 cavans of “hot rice” have reached the Davao port. “This is alarming,” So said. “Smuggled rice continues to enter the country.”  He did not provide more details.

Earlier, the lawyer of two rice importing companies had questioned the government for the seizure of the companies’ rice shipment when the government could no longer impose import permits after their Quantitative Restriction (QR) under the World Trade Organization (WTO) rules already lapsed in June 2012.

So said the Department of Agriculture and the Bureau of Customs seized 403 container vans of smuggled rice in Davao last month.

So said he saw no reason for rice prices to rise since the P2.5 million worth of damage that Yolanda wrought in the Visayas’ ricefields was only minimal.

He said P2.5 billion worth of damaged ricefields only covered four days of consumption of the country’s total rice produce.

Sinag is a coalition of 33 farmers’ and irrigators’ groups.

More than half of 2,357 deaths come from Leyte, Samar – NDRRMC