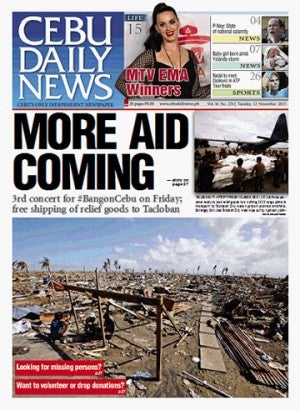 Cebu is not just the new logistics center for government aid for typhoon Yolanda victims in the Visayas.

Cebu’s private sector, which mounted #BangonSugBohol, a unified relief drive after the Oct. 15 earthquake, leaped into action again, this time with a wider mandate to help fellow Visayans in the region.

To respond to needs closer to home, a third benefit concert will be held on Friday at The Terraces in Ayala, to focus on donations for devastated towns in north Cebu. The concert will be called #BangonCebu.

As a “pay it forward” activity, Bohol artists will join the live performances. This includes former model and beauty queen Anna Maris Igpit, who is at the forefront of the #BangonBohol movement for quake victims. She will emcee the show, whose artists include singer and actress Vina Morales, who comes from Bogo City, said concert organizer Wilson and Melanie Ng.

The harder-to-reach areas of Leyte and Samar, however, require more precise planning and logistics to make sure goods reach their target.

One of the first to respond, Gothong Southern Shipping offered to transport, free of charge, all relief goods to Tacloban City on board its vessel, Don Alfredo Sr. 1, which leaves Cebu Port at noon tomorrow and arrives 8 a.m. Thursday in the devastated city.

“We need everyone’s help to fill up the vessel,” said Bob Gothong, the CEO in an e-mail to organizers. The vessel can carry 100 20-footer containers or 2,000 tons.

The cargo vessel can carry emergency vehicles, generators, and equipment that can be accepted directly at the pier area with a maximum of 15 tons.

“We hope we can bring as many as we can as we will be the first commercial vessel to dock directly in the port of Tacloban. This is a cargo vessel. Unfortunately, we can’t bring any passengers,” he said.

Gothong said he finally got word that the Tacloban port was safe to use and the channel was safe to navigate.

The Cebu Chamber of Commerce and Industry (CCCI), lead convenor of the month-old multi-sectoral movement, continues to receive donations in kind and cash at its office in the North Reclamation Area.

“We will prioritize northern Cebu, but may accept donations for other areas like Samar, Leyte, Panay, etc. which will be channeled to sister chambers of commerce,” said Wilson Ng.

Even before supertyphoon Yolanda struck on Nov. 8, stakeholders were preparing relief aid.

“Volunteers are welcome in our office to help us repack goods for the victims,” said May Ybanez, CCCI executive director.

The name evolved from an online campaign of Jay Aldeguer of Islands’ Souvenirs and was adopted as the movement’s battlecry for concerned Cebuanos.

In yesterday’s meeting, most of the original 20 member organizations attended, aside from government representatives from the Provincial Capitol and Department of Trade and Industry.

“No statue of honor has ever been erected to honor those with great intentions or overflowing sympathy. Please act now and fast. Every moment counts,” said Ng in his e-mail appeal to partners.

Other private initiatives took off on their own.

SM Foundation sent relief goods to towns of San Remigio, Bantayan and Medellin in far north Cebu yesterday, and will proceed to Tacloban city today to deliver P50,000 in relief aid for the Visayas.

SM Group announced it has allocated P100 million as a calamity fund for areas devastated by the Oct. 15 earthquake and supertyphoon Yolanda, particularly in, Tacloban, Ormoc, Samar, Cebu, Iloilo, Capiz, and Bicol.

The fund will focus on five types of aid – rebuilding homes, community centers, schools, and churches, and providing immediate relief through food and supplies. With a report by Rose Angeli Ursabia, STC Masscom Intern