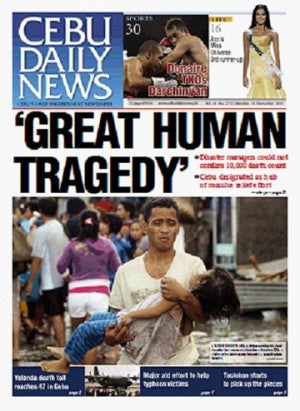 Cebu will serve as a nerve center for a massive relief effort for areas badly hit by supertyphoon Yolanda.

This was revealed yesterday by Cabinet Secretary Rene Almendras in a press briefing two days after what was touted as the world’s strongest typhoon to hit land swept through the country.

“[AFP Chief-of-Staff] Gen. [Emmanuel] Bautista is already airborne, he is going first to Mindanao and he will be in Cebu sometime noon today,” he said. “Why is he going to Cebu? Because he will establish another command post in Cebu because it is the closest logistic center we can set up to support both Tacloban and the Panay area.”

Almendras said a forward command operations center will be established in Tacloban City in Leyte while another will be set up in Western Visayas.

“Last night, we authorize the loading of one of their vessels in Sangley Point, with relief goods which we hope to finish by noon today para ma-dispatch yun papuntang Tacloban,” said Almendras, explaining that it is the same vessel carrying relief goods for Bohol.

The National Disaster Risk Reduction and Management Council (NDRRMC) yesterday admitted it could not give an accurate report count on the loss of lives and properties in typhoon-hit areas because of damaged communications systems.

Throughout the day yesterday, international news agencies reported that casualties could run as high as 10,000, but NDRRMC could not also verify the report which allegedly quoted Eastern Visayas police director, Chief Supt. Elmer Soria.

“If you’re asking me about the estimated damage and the realistic figures on the casualties, I cannot give you anything on that yet,” Maj. Roy Balido, spokesman of the NDRRMC, told the Inquirer.

Asked if the NDRRMC could give an initial assessment of the extent of damage that Yolanda wrought, he said: “I don’t think we can do that now. We don’t even know the real number of casualties yet.”

“We’re really having difficulties contacting local disaster risk reduction and management offices. We don’t know the real situation in the areas where we don’t have line of communications,” he added

Balido said while military units had already reached some of the devastated towns, they were unable to send the information they had gathered.

The Philippine National Police (PNP) said it could not confirm if 10,000 people had really died in Leyte during the onslaught of the typhoon as reported by Chief Supt. Soria.

Senior Supt. Reuben Theodore Sindac, PNP spokesperson, surmised Soria’s information may have been “based on loose talks” by political leaders in the province.

“We can neither confirm nor deny that information. We cannot even contact our troops there,” Sindac said.

He reiterated that only the NDRRMC and its local units were authorized to provide details on casualties and damage during disasters.

Chief Supt. Soria said he was briefed by Leyte Gov. Dominic Petilla late Saturday and was told there were about 10,000 deaths in the province, mostly by drowning and from collapsed buildings. The governor’s figure was based on reports from village officials.

Tacloban city administrator Tecson Lim said that the death toll in the city alone “could go up to 10,000.”

In its latest advisory yesterday, the NDRRMC said 151 persons were confirmed dead, much less than the reports gathered by different media groups and the Philippine Red Cross, which said the fatalities could reach over 1,200.

The council said 23 persons were injured and five were reported missing.

“Most of the fatalities died due to drowning after seawater inundated many coastal communities as the powerful winds brought by the typhoon triggered storm surges,” NDRRMC’s Balido said.

On Samar Island, which is facing Tacloban, Leo Dacaynos of the provincial disaster office said that 300 people were confirmed dead in Basey town and another 2,000 are missing.

He said that the storm surge caused sea waters to rise 6 meters (20 feet) when Yolanda hit Friday, before crossing to Tacloban.

There are still other towns on Samar that have not been reached, he said, and appealed for food and water. Power was knocked out and there was no cellphone signal, making communication possible only by radio.

Reports from the other four islands were still coming in, so far with dozens of fatalities.

In hardest-hit Tacloban, about 300-400 bodies have already been recovered but there are “still a lot under the debris,” Lim, the city administrator, said. A mass burial was planned yesterday in Palo town.

Many corpses hung on tree branches, buildings and sidewalks.

“On the way to the airport we saw many bodies along the street,” said Philippine-born Australian Mila Ward, 53, who was waiting at the Tacloban airport to catch a military flight back to Manila.

“They were covered with just anything — tarpaulin, roofing sheets, cardboards,” she said. Asked how many, she said, “Well over 100 where we passed.”

No way to communicate

Interior Secretary Mar Roxas said a massive rescue operation is underway. “We expect a very high number of fatalities as well as injured,” Roxas said after visiting Tacloban on Saturday. “All systems, all vestiges of modern living — communications, power, water — all are down. Media is down, so there is no way to communicate with the people in a mass sort of way.”

President Benigno Aquino III, who landed in Tacloban yesterday to get a firsthand look at the disaster, said the casualties “will be substantially more” than the official count of 151 — but gave no figure or estimate. He said the government’s priority was to restore power and communications in isolated areas to allow for the delivery of relief and medical assistance to victims.

The airport in Tacloban looked like a muddy wasteland of debris, with crumpled tin roofs and upturned cars. The airport tower’s glass windows were shattered, and air force helicopters were busy flying in and out at the start of relief operations. Residential homes that had lined up a 7-kilometer stretch of road leading to Tacloban City were all blown or washed away.

The winds were so strong that residents who sought shelter at a local school tied down the roof of the building but it was still ripped off and the school collapsed, Lim said. It wasn’t clear how many died there.

“The devastation is, I don’t have the words for it,” Roxas said. “It’s really horrific. It’s a great human tragedy.”

Defense Secretary Voltaire Gazmin said Aquino was “speechless” when he told him of the devastation the typhoon had wrought in Tacloban.

“I told him all systems are down,” Gazmin said. “There is no power, no water, nothing. People are desperate. They’re looting.”

The city’s two largest malls and groceries were looted and the gasoline stations were destroyed by the typhoon. Police were deployed to guard a fuel depot to prevent looting of fuel. /Inquirer and AP