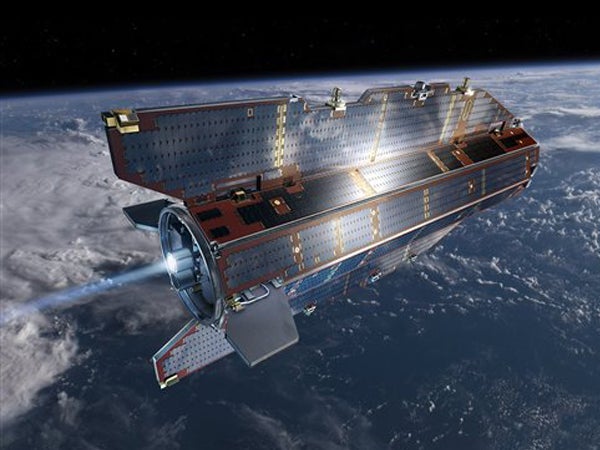 In this image, publicly provided by the European Space Agency ESA, research satellite GOCE flies above earth. The European Space Agency says its GOCE research satellite will crash to Earth on Sunday night Nov. 10, 2013, most likely over the ocean or polar regions. Spokeswoman Jocelyne Landeau said the satellite will mostly disintegrate as it comes down and “we will have only a few pieces which could be 90 kilograms at the most.” The crash is expected to occur between 19:30 and 1:30 Central European Time from Sunday to Monday night.  AP

BERLIN – The European Space Agency said that one of its research satellites that ran out of fuel will most likely crash to Earth into the ocean or polar regions.

It said “with a very high probability, a re-entry over Europe can be excluded.”

Spokeswoman Jocelyne Landeau said the satellite, GOCE, will mostly disintegrate as it comes down and “we will have only a few pieces which could be 90 kilograms at the most.”

ESA said Friday that humans are 250,000 times more likely to win the lottery than to get hit by the debris.

GOCE was launched in 2009 to map the Earth’s gravitational field.