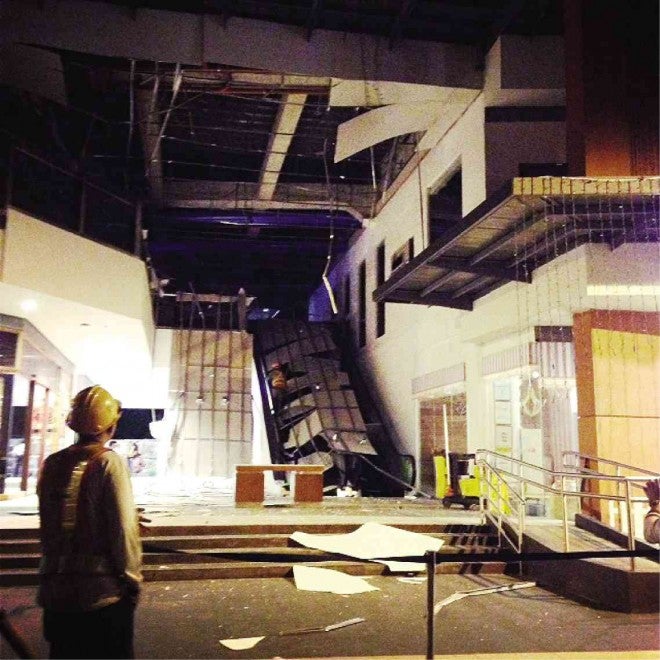 JUST a month after it opened, the UP Town Center undergoes a test courtesy of “Yolanda” late Friday. The result was unforgettable for some diners. CONTRIBUTED PHOTO BY PJ LA VIÑA

Metro Manila was not exactly spared by Supertyphoon “Yolanda,” if you ask people who ran for cover Friday night inside a commercial center that opened in Quezon City just last month.

Three people were injured at the newly completed UP Town Center on the University of the Philippines campus after portions of the ceiling collapsed and fell on them.

The police as well as the mall’s developer, Ayala Land Inc. (ALI), blamed the incident on the strong winds unleashed by Yolanda, which battered mainly the Visayas and parts of Southern Luzon but whose effects were also felt in Metro Manila.

In a statement, ALI said three people were injured, but a report from the Quezon City Police District (QCPD) identified only two of them as Gloria Victoria Matienzo, 25, and her boyfriend Aikon Javaluyes, 34.

Matienzo, a resident of Caloocan City and Javaluyes, of Pasay City, were having dinner at Primary restaurant on the second floor of the complex late Friday night, according to Supt. Richard Fiesta, commander of the QCPD’s Anonas station.

He said both victims were treated at Capitol Medical Center.

The couple were dining at the restaurant around 11:20 p.m. Friday with a female friend, when portions of the ceiling, made of wooden panels, collapsed, Fiesta said.

Photos that circulated in the social media Saturday showed the collapsed portion covering the entire length of an escalator, with pieces scattering to nearby establishments.

Fiesta blamed the damage on the strong winds that blew through the Diliman area.

The officer noted that Town Center security guards refused to answer questions when his investigators arrived at the site.

In its statement released on Saturday, ALI said: “The affected area of UP Town Center, where a portion of an exterior ceiling fell, has been cleared and secured. The incident happened at the mall’s open ‘breezeway’ at 11:20 p.m yesterday as strong winds brought about by Typhoon Yolanda passed through the area.”

The firm said the three injured persons were treated immediately, brought to the hospital for further checkup and were later discharged by the doctors. “We will continue to monitor their condition and provide the necessary care and assistance,” it said.

The UP Town Center at the corner of Katipunan and CP Garcia Avenues in Barangay Pansol was recently completed by ALI, which leased the land from UP. The area was formerly occupied by UP Integrated School.