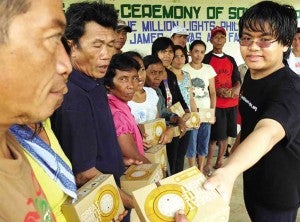 A video posted on the video-sharing website YouTube showed a soda bottle being used as a light bulb in a slum neighborhood in Metro Manila, and it was enough to capture the imagination of 16-year-old student James Olivas.

“Such a small thing made a big difference. I thought there should be something that could also  help the people in Negros,” said Olivas, a student at Bellarmine College Preparatory in San Jose, California.

The teenager decided to bring solar-powered lamps to Negros Occidental, his mother’s home province, because he wanted to make a difference. His efforts paid off.

Olivas’ parents, who migrated to the United States in 2008, showed him last year the YouTube video (http://www.youtube.com/

watch?v=o-Fpsw_yYPg) about a village in Laguna province that didn’t have light in their houses.

A resident called “Solar Demi” was able to bring in light to the houses by slipping through metal roofing soda plastic bottles containing water and bleach.

The video inspired Olivas to help the Philippines, which he understood to be always his chosen paradise and a place of widespread poverty. He started researching online and stumbled on onemillionlights.org on the Net, whose mission is to bring solar lights to poor communities and improve people’s lives.

A solar lamp has its own solar panel charged at daytime for use at night. It costs roughly P1,300 and lasts three to five years.

Olivas broached to onemillionlights.org the idea of bringing the solar lamps to Negros Occidental. The foundation officials then asked him for details.

Since he was based in the United States, he needed a partner in Negros Occidental. An online search led him to Negrense Volunteers for Change (NVC).

“I’m lucky I found NVC because they made me feel that yes, I can make a difference. They are results-oriented and in my opinion, very efficient. They have many different ongoing projects,” he said.

Its website, he said, had pictures of volunteers wearing T-shirts that read “Change begins with me.”

Olivas volunteered for NVC and asked the organization to help him look for communities without access to electricity because he was raising funds for solar lamps.

They first went to Barangay Yubo, La Carlota, trekking for two hours amid heavy downpour, and gave  the solar lamps to 82 families. “It was a new experience so I enjoyed it a lot,” he said.

The next day, the group went to Barangay Santol in Binalbagan to hand over the lamps to 68 families.

“Delivering the lamps was an amazing experience. It took a lot of time and effort to put everything together. But as soon as we were done, the guys from OML Philippines and I were flirting with the idea of having another delivery next year! It was so fulfilling for me to do this,” Olivas said.

“I doubt I can do this again so soon, but if I could, I won’t hesitate to ask help from NVC,” he added.

While waiting for his inventory of lights to build up, Olivas, who was born in Palo Alto, California,  organized an NVC chapter in San Francisco, California, and sent donated books and school supplies to public schools in Negros Occidental.

“We’ve managed to ship about 2,000 mostly used books to public school libraries in Negros,” he said. The NVC’s Books Build Change team sorted and distributed the books to schools all over the province.

“When our group here found great deals, we also got some school supplies to send with the books,” Olivas said.