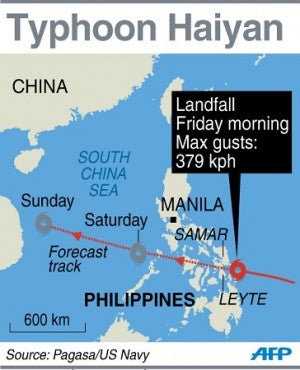 Two died from electrocution while the other one was struck by lightning, NDRRMC spokesman Major Rey Balido said at a press briefing.

He identified the three as Enex Deinla from Masbate and Jimmy Cabilan, both died from electrocution.  Regie Francisco Bucoy from Zamboanga City was struck by lightning.

Seven were also injured — one in Zamboanga City and six in Guimaras.

Close to a million people sought refuge in temporary shelters in anticipation of the typhoon. A total of 718,208 persons were pre-emptively evacuated in 581 shelters in 29 provinces affected by the typhoon, Balido said.

There were 3,093 passengers stranded in various sea ports, data from the Philippine Coast Guard showed.

At its peak, Yolanda made landfall in Guiuan in Eastern Samar with its maximum sustained winds of 235 kilometers per hour and gusts of up to 275 kph. It made four more landfalls after.

A foreign weather expert said that Yolanda is the strongest cyclone to make landfall in history.

“Thus, Haiyan had winds of 190 – 195 mph at landfall, making it the strongest tropical cyclone on record to make landfall in world history. The previous record was held by the Atlantic’s Hurricane Camille of 1969, which made landfall in Mississippi with 190 mph winds,” Masters said.

The typhoon was accompanied by torrential rainfall, violent winds and dangerous storm surges.

State weather bureau officer in charge Vicente Malano said that a storm surge as high as 15 feet was recorded in Tacloban.

National Telecommunications Commission Director Edgardo Cabarrios said that telecom services of Smart and Sun were “degraded” in Samar and Leyte, and “totally out” in Tacloban and Ormoc.

Yolanda is expected to exit the Philippine area of responsibility by Saturday morning.