Senators fail to get Napoles to spill beans on ‘pork’ scam

Janet Lim-Napoles’ testimony at the Senate hearing on the pork barrel fund scam on Thursday raised more questions than answers as she managed to evade the grilling of senators.  Video by INQUIRER.net

Napoles, who is at the center of the scam, evaded and repeatedly invoked her right against self-incrimination when she faced and testified for the first time before the Senate blue ribbon committee.

At the start  of the hearing, Napoles  requested for an executive session , citing the  sensitivity  of the issue. But the committee immediately turned down the request and  proceeded with the hearing.

And when committee chairman, Senator Teofisto Guingona III,  asked if it was true that she had formed  21  foundations, which she named after her relatives and workers,  Napoles said: “Hindi po [No].”

But principal whistle-blower, Behur Luy, who was also present in the hearing belied  Napoles’ claim and called her a liar. 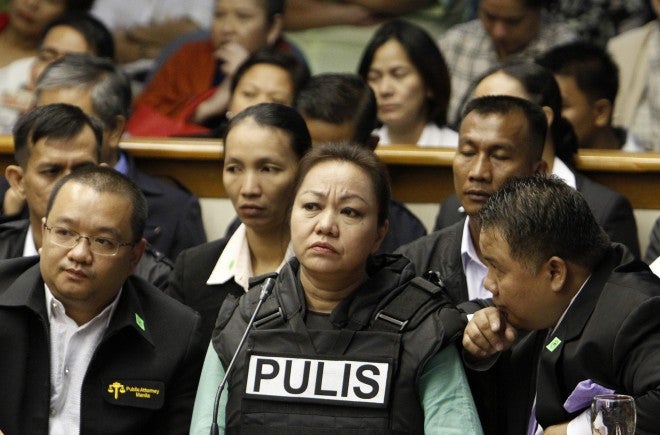 And when Guingona again asked if it was true that he had any transactions with the lawmakers implicated in the scam, Napoles also answered in the negative.

“Nakakaawa nga po yung mga senador at mga congressmen na nada-drag ang pangalan nila [The senators and congressmen are to be pitied because their names are being dragged]…” she added.

Luy, who worked for Napoles, again belied his former boss’ claim, saying he himself personally delivered money to former Agusan del Sur Representative Rodolfo Plaza in his home on Alabang Hills and to one Ruby Tuason in Bel-Air  and a certain Pauline Labayen in Dasmarines Village in Makati.

Enrile, Estrada, Plaza, Tuason and Labayen were among those facing criminal charges at the Office of the Ombudsman  in connection with the “pork scam.”

To further prove his claim that Napoles had dealings with lawmakers,  Luy said that it was the businesswoman who directly gave “commissions” to Plaza.

If all the accusations against her were not true, Guingona asked  Napoles what was the truth then.

“Hindi ko po alam sa kanila [I don’t know with them],” she said.

Napoles confirmed, however, that former Representative Edgar Valdez, who was also linked to scam, went to her office once at Discovery Suite in Ortigas but immediately clarified that it was her husband who  knew Valdez.

“It was only Valdez who went to our office one time. And he  only  talked  to my husband,’  she said in  Filipino.

Even the fiery Senator Miriam  Defensor-Santiago failed to get Napoles to talk about the scam when she repeatedly invoked her right against self-incrimination to almost every question that the lady senator asked.

Napoles first  invoked such right when Santiago asked if she knew the three senators – Enrile, Estrada and Ramon Bong Revilla Jr. , who have been dragged into the controversy.

She then repeatedly invoked such right when  asked to confirm if  Enrile  was the one being referred to as “tanda” in the previous hearings.

When asked again if Estrada was the one  referred to as  the “sexy” senator, Napoles  said: “Hindi ko po alam (I don’t know).”

“Anong hindi mo alam. Alam mo e (What do you mean you don’t know? You know),” Santiago said, adding that Napoles should have just invoked her right against self-incrimination.

So Napoles invoked such right when Santiago repeated the question and to the question on whether Revilla was the one being referred to as “pogi.”

Napoles’ repeated invocation of such right did not also sit well with  the lady senator  when she  she asked who she had been talking to about the plunder case filed against her at the Office of the Ombudsman.

“I invoke my right against self-incrimination,” Napoles said.

“Sino lang kausap mo , I invoke my right? Aaah..”   said Santiago, who was apparently getting impatient with Napoles.

The committee ended the hearing as some senators expressed their disappointments  at how   Napoles conducted  herself during the proceeding.

Guingona said he has yet to consult the members of the committee whether or not to call Napoles again in its next hearing.