Protesters welcome Janet Lim-Napoles as she arrives at the Senate on Thursday, Nov. 7, 2013, to attend a hearing investigating her alleged involvement in the P10 billion pork barrel scam. The rallyists tried to enter the Senate gates but were blocked by a phalanx of policemen. Video by INQUIRER.net’s Noy Morcoso III

One convoy, with at least five vehicles, including police cars and an ambulance, arrived around 9:30 a.m.

It passed by a group of protesters gathered nearby. There was no attempt to block the vehicles 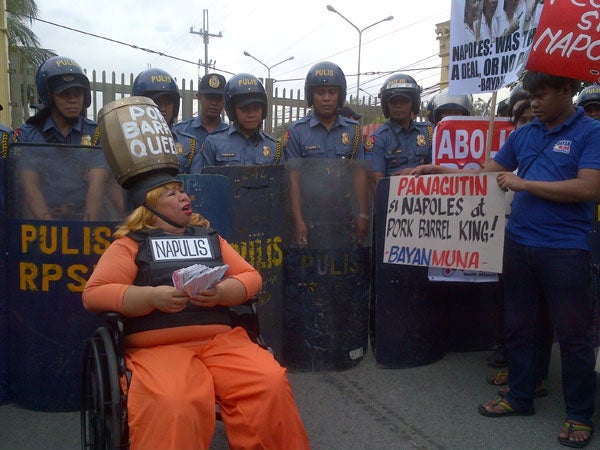 ‘PORK’ PROTEST Mae Paner aka “Juana Change” appears in a wheelchair as Janet Napoles Bariles during a “pork” protest Thursday, Nov. 7, 2013, at the Senate where the real Janet Napoles is testifying before the blue ribbon committee on allegations that she masterminded the P10 billion pork barrel scam. JAMIE ELONA/INQUIRER.net

The protesters, carrying placards of “abolish all pork-like funds” and shouting “abolish pork barrel” attempted to march to the Senate office, but were blocked by police.

o gathered in front of the Senate’s main gate where a phalanx of policemen was also waiting.